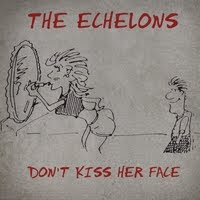 The family band is something that died out with the sunset of the 1970's. Bands like The Osmonds, The Jacksons/Jackson 5 and the Cowsills dominated the pop charts in the early 1970's with gooey pop confections. More recent family acts such as Hanson have had some success, but not to the level of the 1970's trio above. The Echelons look to bring the family band back in a big way. Guitarist Ben Petrella (known as Dad to the rest of the group) played guitar for The Drive-Ins and bass for King Neptune & Wally World previously. Jessica Petrella (keys, vox) is all of 19 years old, while guitarist Louis Petrella clocks in at 12 years and growing. The band is rounded out by neighbors Brian "Binger" Santo (bass) and Brandon Grande (drums). Songwriting duties are shared, with 21-year old Sarah Petrella, who's not in the band, contributing material she wrote with Don Goodman (Alabama, Reba McEntire, Blake Shelton). The Echelons' debut album, Don't Kiss Her Face, has the pop sensibility of earlier family bands, but adds a modern edge that is a mark of their youthful exuberance.

Don't Kiss Her Face is what it is. Some of the songs sound a bit young, which is befitting the respective ages of The Echelons. That means there will be some moments along the way where the lyrics are a bit awkward, but musically The Echelons put on a top-notch performance on Don't Kiss Her Face. The entire band has occasional disagreements on key in the vocal line, but the deviations aren't horrible and serve to foster a Lo-Fi feel to the album that the production values also support. Don't Kiss Her Face opens with Remember Me, a sophomoric yet touching song of love, desire and loss. I'll Have To Go looks at relationships from another side; realizing that things aren't working and having to cut your losses. Don't Kiss Her Face is the star of the album, a funny diatribe about women who wear too much makeup. This has seriously licensing potential and even breakout Pop radio potential.

World Of Her Own is a bit on the average side, but the guitar work is splendid. Another favorite track is Dressed In White, which might be tagged with a "Geek Punktronica" label. The song is very entertaining, both lyrically and sonically. Ben Petrella takes lead vocals on Life Ain't No Day On The Beach, sounding a bit like David Byrne singing a Reggae/Rock tune. This is probably a killer tune when done live. The Echelons close out with My Best Friend, a broken heart song that's young but poignant.

The Echelons might be young but I suggest you take them seriously. There are a few songs here that just don't work, but when everything clicks, The Echelons are highly entertaining. Don't Kiss Her Face is the sort of album you'll be trying to hunt down five years from now when they hit the big time, and probably paying big money for on eBay. The mix of humor and intelligence bodes well for the growth of the band as songwriters, and musically they are already all they need to be. Make time, and room for The Echelons. They're not going away.

You can learn more about The Echelons at http://www.theechelons.net/. You can purchase Don’t Kiss Her Face as either a CD or download through CDBaby.com.
Posted by Wildy at 5:10 AM