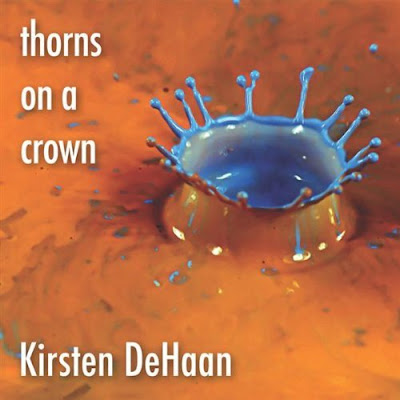 Kirsten DeHaan is one of the most fiercely independent artists on the Indie music scene. With a firm belief in artists owning their own music, DeHaan started the New York Indie Rock Launch in 2006; a show intended to bring the best of New York City's Indie Rock scene together under one roof. The shows have continued since then with entirely grass-roots promotion and sell out every time. DeHaan also regularly performs for US troops abroad via webcast and continues to support Indie music however she can. Recently re-locating from Brooklyn to Woodstock, NY, DeHaan has released her latest CD, an EP entitled Thorns On A Crown. Thorns On A Crown features a raw, personal approach that is a fresh turn for DeHaan.

DeHaan opens with 1984, a low-key rocker with an understated, Cowboy Junkies feel. DeHaan has an interesting voice that ranges from a throaty alto to an electric, rocker-girl sound in her upper register. Double Or Nothing is a funky rocker with seriously strong guitar work. I didn't enjoy the song itself a great deal but the individual components are strong. I'm Coming Home is the most personable and edgy track on the disc. This is the sort of music I'd want to hear in a coffee shop or small, intimate venue. DeHaan displays real personality in her music, but may be a bit too far off the beaten track for some. DeHaan closes out with Ms. Daisy, a decent track that didn't really ring any bells but wasn't bad either.

Kirsten DeHaan puts in a solid effort on Thorns On A Crown. Her style and sound are personal and personable, but there's something funny going on in the energy here. The songwriting itself is fairly average, although DeHaan ups her game by throwing herself into each song. Thorns On A Crown is likable, but it doesn't really grab you.

You can learn more about Kirsten DeHaan at http://www.kdlocal.com/ or www.myspace.com/kirstendehaan. You can download Thorns On A Crown from Amazon.com.
Posted by Wildy at 5:00 AM