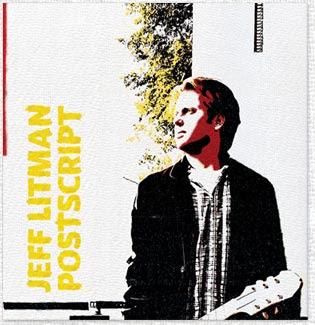 New York City singer/songwriter Jeff Litman was born in Minneapolis, and was devouring hard rock and metal songbooks by the age of ten. Litman went from Bon Jovi and Motley Crue to Metallica, Guns N Roses and Nirvana before becoming ensnared in the melodic Pop of acts such as Elvis Costello, The Beach Boys and The Beatles. Litman's next step was into classical music, entering a doctoral program before realizing that his true love lay in Rock and Pop. Litman began writing almost immediately for his debut album. The result, Postscript, promises Indie-Pop with big hooks, infectious melodies and a classic sense that universal themes of love and heartbreak always bring. Postscript is a breakup album, and Litman's refreshing honesty places the listener not so much in the role of observer but directly into reverie.

Postscript is a story within an album, following the rise and fall of a relationship, including the aftermath. It is written at a distance from the events that perhaps allow more perspective, but the raw emotional content is very real, if tempered by time. Postscript opens with Anna, a catchy song about unrequited love that will definitely get your toes tapping. A Beatles influence is very clear here and the backing vocals are superb. This is a complete song; a classic. Complicate digs into the emotional consequences of a breakup. It's a sunny tune full of regret and melancholy. Wife is a song that could put Litman on the Popular Music map; a marriage proposal in song. The gorgeous arrangement, including strings centers on acoustic guitar and Litman's voice. Don't be surprised if Wife gets licensed and recorded by other artists down the line. Either way the song is destined to become a wedding song of choice and is also likely to be co-opted for individual proposals over time.

From that emotional high Litman dips down to the emotional low of Everything You're Not; an upbeat, Beatles-inspired song of hopeful spite. Litman then shifts gears into full-on Rock N Roll in Detroit Layover. If you've ever been stuck someplace out of your control and just wanted to get home then this song will speak to you. It's very upbeat and danceable and has a classic sound that will appeal across genre lines. Postscript is one of those albums where it becomes difficult to pick a favorite song, but one of the contenders has to be Maine. Litman sings a duet with Kelly Jones on another song about going home. This is one of those songs that simply sounds perfect in presentation, and Jones has an amazing voice that complements Litman's perfectly.

Knock Me Down will get you up and moving. This active-rock song is presented in a brilliant arrangement with amazing vocal harmonies and a melody that won't quit on you. Postscript is another candidate for favorite song; it's a theatrical tune about the end and aftermath of a relationship. Postscript is stark and melancholy without being whiny, and is one of the better Pop songs written/released in 2009. Open Arms represents the bargaining phase of grief. He's willing to take her back temporarily for the joy of it even it means she'll rip his world apart all over again. Litman never begs during Open Arms but that's only a semantic justification. Open Arms shows a tremendous balance of lyrics, melody and arrangement in a wonderful pop tune that isn't far behind Postscript. Let You Go chronicles the Acceptance phase of loss with a song that sounds like it was heavily influenced by Elvis Costello. Litman closes out with It Wasn't Me. This epilogue is stark and honest and unfettered by sorrow. Litman sees everything from the distance and perspective of time with his healing mostly done; it's a fitting close.

There are albums you see coming from a mile away; the artist reputation, the cover art, the buzz all combine to create an understanding of what you're getting into. But every once in a while an album takes you by surprise. Jeff Litman's Postscript is in this latter category. Postscript is a brilliant display of songwriting and performance. The songs are subtle, nuanced and intelligently written and the album is an absolute pleasure from beginning to end. There isn't a poor song on the album, and Litman delivers each with an aplomb that grows from the intersection of artfulness and grace. Postscript is brilliant; a Wildy's World Certified Desert Island Disc. Make the time.

You can learn more about Jeff Litman at http://www.jefflitmanmusic.com/ or www.myspace.com/jefflitman. You can purchase Postscript as either a CD or download from CDBaby.com.
Posted by Wildy at 5:10 AM