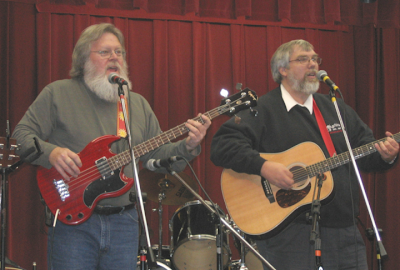 Silverbird is the Atlanta, Georgia duo of David Leinweber and Bob McMillan. Career musicians, Leinweber and McMillan play covers that range from easy listening to rock but are most at home playing their own original material. Silverbird plays almost everything but are primarily influenced by the music of the 1960’s. Their debut album, Silverbird, was released earlier in 2009.

Silverbird slips gently into Boomer Rock mode on their self-titled debut, following in the footsteps of bands like The Band, Crosby Stills & Nash and the like. Thursday Ride bespeaks of a time when cruising was the thing to do. Heart Of A Song sticks with reverie, but this time about the music that inspires us. Musician's Prayer is a bit kitschy but cute. A prayer with a sense of humor, Musician's Prayer will be entertaining for most. Daphne is presented in both studio and live versions, and was written about the character of the same name from the old Dark Shadows TV program. Played by Charlie's Angel Kate Jackson, Daphne is the reason for a bit of inspired story telling here. I, for once, actually preferred the studio version to the live versions. Sweet Delilah is a song I viewed with some skepticism when I saw it on the track list as the subject has been covered as long as songs have been written, but Silverbird surprises with the best songwriting and performance on the CD. A great hook, great melody and unforgettable chorus make this a must-have disc, much less song. The power of music is revealed in Mitch Ryder Revisited, which recounts the ability of the music of our youth to pick us up all throughout our lives. Silverbird closes out with Some Like It Hot, a decent Blues tune with some fiery guitar play.

Silverbird is a decent enough debut, with some great moments and a few where things get a little lost. The balance sheet points to good things here, however. The songwriting is nuanced and mature, the musicianship is great, and vocalist David Leinweber has a highly pleasant voice to listen to. Silverbird is definitely a bit more oriented to the Baby Boomer market, but fans of great music of all ages will find something here to like.

You can learn more about Silverbird at http://www.davidleinweber.com/ or www.myspace.com/silverbirdduo. No online outlet was noted to purchase Silverbird, but if you contact the band through their MySpace page I’m sure they’ll be happy to help you out.
Posted by Wildy at 5:00 AM

Hey, the digital downloads for "Silverbird" are now available on itunes, as well as here on CDBaby: http://www.cdbaby.com/cd/Silverbird.