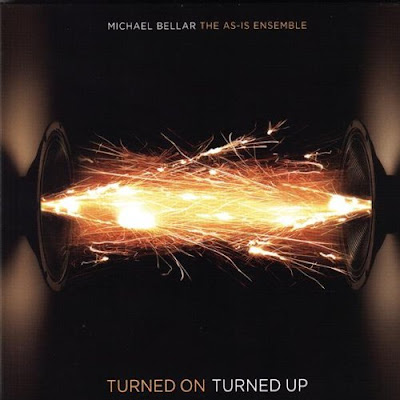 Michael Bellar and The As-Is Ensemble were, at one time, the house band at New York City's Blue Note jazz club. They have played Lincoln Center (NYC), The Kennedy Center (Washington, D.C.) and the JVC and Bell Atlantic Jazz Festivals. Their latest album, Turned On, Turned Up, displays the band's penchant for high-energy jazz and sense of mischief, as if anything might happen at any time. Featured performers on Turned On, Turned Up include bassist Rob Jost (Imogen Heap, Bjork); drummer Brand Wentworth (Aretha Franklin) and percussionist Robert Di Pietro (Norah Jones, Jessie Harris). Michael Bellar himself has toured/recorded with Art Garfunkel, Amos Lee, Howie Day, Wheatus, Jump Little Children and Giorgia

Turned On Turned Up opens with Squashing Pollyanas; serious Funk with an incredibly infectious bass line and high quality organ work over the top. This highly creative and danceable instrumental gets The As-Is Ensemble off on the right foot. The choice of Ben Folds' Fred Jones Part 2 as a cover is interesting. The instrumental version offered up here reminds us that Folds isn't just bombast and keys but a pretty mean songwriter as well. Bellar plays around the edges a bit but leaves the melody line essentially intact while burying it in reverb on the synth. All Things Rabbit is a high-energy jazz/rock instrumental featuring keyboard work vaguely reminiscent of The Who.

The As-Is Ensemble turns expectations on their heads with Fur Turban, carrying a Middle Eastern Flavor and Latin Rhythms. The song is highly energetic in presentation and is very entertaining. The Damage Done captures a European sound that verges on melancholy before busting out into a bass-driven, accordion-led chorus. Unravel is an introspective rainy-day peace, with a melancholy-yet-hopeful feel that's more intriguing with each listen. The As-Is Ensemble takes on Led Zeppelin with their instrumental version of Misty Mountain Hop, which turns out to be a big treat. Turned On Turned Up closes out with Yoga For Prison Girls, a questionable selection as the arrangement is mellow and frankly, it's likely the weakest track on the disc.

Michael Bellar/The As Is Ensemble are a highly original and intriguing bunch. Turned On Turned Up a bit uneven at times, but overall is a very strong release.

You can learn more about Michael Bellar/The As-Is Ensemble at http://www.michaelbellar.com/. You can purchase Turned On Turned Up as either a CD or download from Amazon.com. You can also download the album from iTunes.
Posted by Wildy at 4:55 AM