Review: Esthema - The Hereness And Nowness Of Things 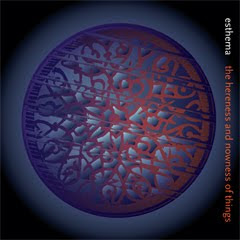 Boston’s Esthema may be one of the most original acts we’ve come across. A World Fusion band that takes that label to heart, Esthema blends Eastern European, Middle Eastern, South American and Far Eastern Sounds with Progressive Rock and Classical elements to create magic. Esthema released their debut album, Apart From The Rest in 2007, receiving significant positive press. They follow up on November 3, 2009 with their sophomore effort, The Hereness And Nowness Of Things.

Esthema leads off with Change Of Season, mixing Western, Middle Eastern and Far Eastern sounds in a dynamic musical composition that sounds like it should the opening score element of a major motion picture. The piece has a highly distinctive sound and style and is very enjoyable. The cultural genre-bending continues on Eastern Dance. Highly energetic and danceable, Eastern Dance varies significantly from the sort of popularized dance music currently in vogue, relying on pulsing and morphing organic rhythms that travel from percussion to strings and back again. The focus changes slightly on the Mediterranean flavored A Place To Rest before Esthema returns to a grand cinematic feel for Arrhythmia. Nuanced and vibrant, A Place To Rest co-mingles Middle Eastern and old world Spanish styles and sounds in pleasurable ways.

Four Colors features a vibrant, almost frantic energy in an explosively energetic dance number before Esthema rolls into Illusion Of Truth. Illusion Of Truth has a cloudy feel to it, with a theme that's roiled and punctuated by turbulence. It's as if "facts" and "truth" collide atmospherically in a cycle that never ends, winding and unwinding throughout the composition sparking sometimes storms and sometimes unsettled skies. Esthema closes our with the "Pop-iest" selection on the disc. On & On has a serene feel that's neither ethereal nor ambient but lends to a sense of transcendence. You can almost hear an arrangement of this forthcoming from Keith Lockhart.

We noted that Esthema's Apart From The Rest was a magical musical experience. On The Hereness And Nowness Of Things, Esthema leaves behind the magical world for the gritty, earthy charm of The Mediterranean, where culture upon culture washes upon the shore with sometimes unpredictable outcomes. The Hereness And Nowness Of Things is a musical breadbasket where loaves and fishes mix in fantastical ways and there's always enough to fulfill you as a listener, no matter how many times you return.

You can learn more about Esthema at http://www.esthema.com/ or www.myspace.com/esthemamusic. The Hereness And Nowness Of Things drops on November 3, 2009. Keep checking Esthema’s website for availability.
Posted by Wildy at 5:10 AM