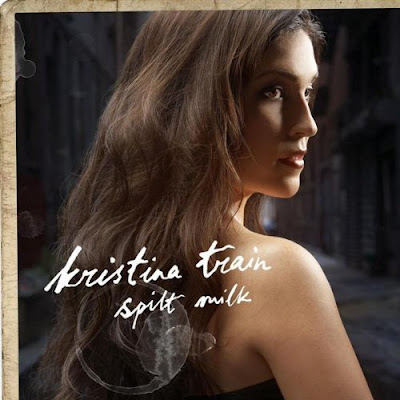 Kristina Train was destined to wind up where she is. Yesterday, Blue Note Records released Train’s debut album, Spilt Milk. Blue Note has pursued Train for several years, but at her mother’s assistance she went to college before pursuing her dream. In the process, Kristina Train learned more about the world, but she also learned more about herself. More confident and self-assured than she was at nineteen years of age, Train approached Spilt Milk with a clear idea of what she wanted to accomplish. Recorded and produced by Jimmy Hogarth (Corinne Bailey Rae, Duffy, James Blunt, Spilt Milk makes Train’s influences abundantly clear without sounding like anyone other than Kristina Train. Shades of Aretha Franklin, Raelette Mable and Karen Dalton can be heard, but the voice that emerges can be no one than the Savannah Georgia native with the wonderfully textured voice.

Train opens with the title track, sounding like a sultrier, worldlier version of Norah Jones. Train mixes the modern silk of Jones with the classic Rhythm N Blues sound of artists like Aretha Franklin and Tina Turner and newcomer Melinda Doolittle. Spilt Milk plays like a classic tune with a theatrical feel to it. No Man's Land keeps that classic R&B/Soul feel in a diva-like performance from Train. The melody is one that will get stuck in your brain, and you'll find yourself swaying along. Don't Remember and Don't Beg For Love have similar styles, leading into the Turner-esque It's Over Now, a song steeped in the history of R&B but which could very well chart today.
Train has a true Diva moment on You're Still Going To Lose, showing the presence and dramatic sense to command attention with the right material. This is the biggest highlight of the album. Moon Rivers And Such is more in the Norah Jones realm, but the gentle rasp and power in Train's voice set her apart. Train is able to capture a classic sound while coming across young and hip here and throughout the disc, an unusual quality that should do well for her. Call In The Maker is one of the more intriguing songs on the disc; mixing elements of Gospel, Soul and The Blues in a dynamic performance that sounds like it might have come right out of Muscle Shoals. Half Light is all about regrets that stem from entering (or re-entering) a relationship you shouldn't be involved in. The writing here is nuanced, but Train is chomping at the bit here to break out and the song never quite allows that opportunity. Train closes out with Far From The Country, a classic love song with a Motown feel to it.

Kristina Train has an amazing voice, and she gets to display it amply on Spilt Milk. The down-tempo nature of the album might restrict here a tad here and there; the moments when she's allowed to truly soar are tempered by slower material that's not conducive to the big impressive belt she's capable of, although they do happen. Along with folks like KT Tunstall, Melinda Doolittle and Joss Stone, Kristina Train looks to bring some old school magic to modern music. Look for Spilt Milk to garner Train a lot of critical praise and expect her to be around for a good long while.

You can learn more about Kristina Train at http://www.kristinatrain.com/ or www.myspace.com/kristinatrain. You can purchase Spilt Milk as either a CD or download from Amazon.com. You can also download Spilt Milk through iTunes.
Posted by Wildy at 5:00 AM

FEINSTEIN'S AT LOEWS REGENCY, the nightclub proclaimed "Best of New York" by New York Magazine, will debut MELINDA DOOLITTLE in her first-ever nightclub engagement from November 17 – 21. The “American Idol” finalist will perform an intimate evening of jazz standards, pop hits and Broadway classics, in addition to selections from her CD, Coming Back To You. All shows are at the Regency Hotel (540 Park Avenue at 61st Street). For ticket reservations and club information, please call (212) 339-4095 or visit feinsteinsatloewsregency.com and TicketWeb.com.