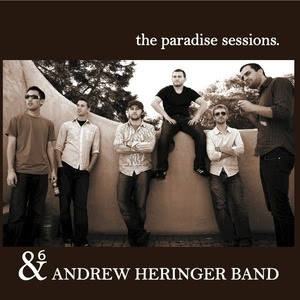 Sacramento California’s Andrew Heringer is a singer-songwriter who has tied his fortunes to a Rock N Soul Jam Band. Heringer has shown a natural pre-disposition for the stage from his early teens, and his Dave Matthews/Jason Mraz style songwriting has helped him build a steady fan base on the West Coast. The Andrew Heringer Band is currently working on a new album, due out in late 2009 or early 2010, but for today we’ll be checking out their debut, 2008’s The Paradise Sessions.

Heringer opens with Sit & Stare, a song all about the cat & mouse games that come with getting to know someone. It's a great tune with some light jazz flavoring. Heringer's voice is pleasant to listen to with a slightly rough texture. Molly opens with a free-form sax solo that slowly segues into the song called Intro #1. Molly is a loving ode that manages to be catchy; sounding a bit like Rob Thomas meets Dave Matthews. Heringer hits all the right notes on A Thousand Years, a sweet love song set in an acoustic/electric arrangement. The highlight of the album is Release The Funk a delicious Rock instrumental laced with funk and some serious piano chops. The piano and sax combo is reminiscent of the days when Richie Canata played with Billy Joel.

Intro #2, a decent instrumental guitar segue opens up Love To See You Smile. This is a slow love song that tries to be a bit more typical in the ballad category but just never captures the energy you might expect. Heringer goes for epic composition on Goodnight. Lengthy at 6:01, Goodnight goes from straight forward songwriting to Progressive breakdowns before settling back into its base theme. The songwriting is very strong, although the tune does get a bit unfocused at times. Summer Roof gets similar marks, falling so heavily into a jam mentality that the melody gets lost.

The Paradise Sessions speak of many things. Andrew Heringer and his band have a great deal of talent. They write and play well, and they like to jam. They just seem to have a difficulty marrying the songwriter aspect with the jam musician aspect of themselves. The great jam bands can take you on nearly endless detours and suddenly settle into the theme and make you feel like the whole thing was planned. The Andrew Heringer band gives the impression, even on their album, that sometimes the fact that they get back to where they started is almost more luck than planning. This is fine for an Improv band, and there's nothing wrong with flying by the seat of your pants once in a while, but The Paradise Sessions dances right off the tracks at times, making those transitions seem more jarring than at-ease. There's a lot of good here, but the process, perhaps, could use a bit of refining.

You can learn more about The Andrew Heringer Band at http://www.andrewheringer.com/ or www.myspace.com/andrewheringer. You can purchase a copy of The Paradise Sessions from Big Cartel.
Posted by Wildy at 5:05 AM