Review: Taylor Mills - Under The Surface 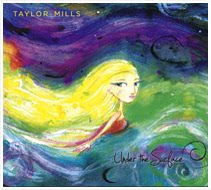 It's likely you've heard Taylor Mills' voice before and not realized it. Mills has been touring and recording with Brian Wilson's band for ten years now. You can't miss her, she's the only female member of the band; the electric blond with the angelic voice. She's also performed with the likes of Billy Joel, Elton John, Jeff Beck, John Legend, Neil Young, Bruce Springsteen, Eric Clapton and Paul McCartney. Mills' 2007 debut album, Lullagoodbye, incited a significant amount of critical praise. Never one to rest on her laurels, Mills is back with her sophomore effort, Under The Surface. Co-produced by Scott Bennett (Brian Wilson) and husband Todd Sucherman (Styx), Under The Surface takes a slightly more low-key approach that Lullagoodbye. With a voice like Mill's, you couldn't blame her for showing off a bit, but Mills lets the songs be a vehicle for her instrument rather than the other way around. Mills lets the songs shine, providing an enthralling listening experience.

Under The Surface opens with Melody, a song about an aging singer who sees his better days behind him. Melody expresses the power of music to uplift and at times even save someone, but also acknowledges that dreams don't always age well. Sparks Will Fly is a song about sitting on the fence. The protagonist views the world as something that is happening to her, waiting for romance to happen to her. Stuck, she pines for a time to come. The song is very well-written, and Mills illuminates it with a gorgeous and precise vocal line. Mills truly shines on Kiss My Soul, a classic 1980's style rock ballad in a relaxed, quasi-acoustic setting. The song itself is decent, but Mills shines so bright here she actually makes the song better. Best Intentions is a heartbreaker about those times when a relationship falls apart not because of a lack of love or desire but simple inertia. Taylor Mills is at her most vulnerable in a song that rings too real and true to be pure creation. Best Intentions it the best of the best in the crowded field that makes up Under The Surface.

Living Room finds Mills shaking off the outside world to be fully with the one she loves. It's a great bit of low-key rock with a powerful, dynamic vocal line that could shake up a room in a live setting. Mills is joined by Scott Bennett on the duet If We Let Go. The vocals are great and the sound is professional, but this tune sounds too much like something from a 1970's movie drama/romance. As before, the performance makes the song better than it would be on its own. Mills closes out with St. Louis Misery, a song about adultery that begs for some country twang. Mills' vocal is impassioned and incredible, but you can almost hear the ghost of a pedal steel guitar playing along.

There's not much to be said about Taylor Mills' voice that hasn't already been said. Her performances on Under The Surface are brilliant, eschewing the now standard histrionic displays of modern pop for pure artistry. Mills digs into each song on Under The Surface, allowing the process and performance to reveal the layers and magic in her voice, rather than trying to impose herself on the songs. The result is an album that doesn't necessarily blow you away on first brush, but gets better with each successive listen. Under The Surface is aptly titled; don't be surprised if this album ends up on a lot of end-of-year "best" lists.

You can learn more about Taylor Mills at http://www.taylormills.com/ or www.myspace.com/taylormillsmusic. You can purchase copies of Under The Surface, signed or unsigned through Taylor Mills’ webstore.