Review: The Dimes - The King Can Drink The Harbor Dry 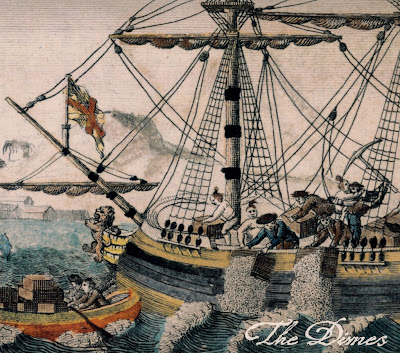 The Dimes - The King Can Drink The Harbor Dry
2009, Pet Marmoset Records

Last year I reviewed a recording from Canadian singer/songwriter Mike Ford, Canada Needs You, Volume 2. The album was essentially a lesson in Canadian history set to music. At the time I remember thinking that it would be great if somebody would do something similar with American History. And along come The Dimes. Their sophomore album, The King Can Drink The Harbor Dry, is due for release on December 1, 2009, and features amazingly polished songwriting, memorable melodies, divine harmonies, top-notch instrumentation and yes, a steady dose of obscure American history with Boston as the center of it all. Engineering for the album was handled by Jeff Stuart Saltzman (Death Cab For Cutie, Decemberists, Sleater-Kinney).

The Dimes open with Damrell's Fire, a tale about The Great Boston Fire of 1872. The Folk/Americana arrangement is perfect accompaniment to the autobiographical account of one fireman who would not survive. The song is artfully written and beautiful in melody and harmony. The Liberator recalls the abolitionist newspaper published by William Lloyd Garrison between 1831 and 1866. The Boston-based paper was very controversial, particularly in the South. The instrumentation provided by The Dimes wraps around the narrative like a comfortable cardigan; these guys can play. The Dimes pay tribute to Clara Barton, founder of The American Red Cross on Save Me, Clara. The missive is from a dying soldier. Make sure you listen to the lyrics on this one in particular. Aside from being a fine vocalist, Johnny Clay is pretty amazing as a word smith as well.

The inspiration for Celia's Garden came from a painting by Impressionist Childe Hassam of Celia Thaxter in her garden. The song is done in a glorious Pop/Americana arrangement with Crosby Stills & Nash-style vocal harmonies and a melody that attaches itself to your brain and won't let go. The Ballad Of Winslow Homer is a gorgeous Folk song where each verse is based on a painting of Homer's. This might be the best all-around songwriting on the album, and the vocal harmonies are exquisite.

Webster Thayer was written about the judge in the infamous Sacco And Vanzetti trials, accused of forcing the trial toward conviction. Critics at the time (and posthumously) decried Thayer's handling of the trial. This tune is a Folk/Rock offering that details one perspective on Thayer's state of mind during the trial. The tune is well-written; the ideas clearly communicated. Perhaps not as dynamic as the rest of the album, but a strong song nonetheless. Charles Street serves as something of an epilogue to Webster Thayer, a paean to the infamous Boston jail that held Sacco & Vanzetti and later, Malcolm X. This song has a straight-forward Folk/Rock feel with an intriguing chorus that's both upbeat and dark.

Lovely Mary Dyer gives a strong picture of one of the "Boston Martyrs. Mary Dyer was a Quaker living in Colonial Massachussets. Massachussets law forbid Quakers from living within its bounds. Dyer continued to do so in spite of a previous arrest and knowledge of what would happen to her if caught again. Dyer was hanged for beliefs, and became a symbol to remind the Puritans of the reason they had come to New World: religious freedom. The song is a loving tribute in a lush arrangement with simple but elegant harmonies. Abigail, Don't Be Long pays homage to Abigail Adams, wife of John Adams and mother of John Quincy Adams. This Beatles-esque ballad has an upbeat pleasant arrangement and is a great fit as the penultimate track. The Dimes close out with Boston (Trimountaine), a musical geography lesson of the city of Boston with attention paid to historical sites.

The Dimes take a risk by steeping their songwriting in so much history, but the risk pays off with a collection of songs that are beautifully written, artfully described lyrically and full of a love of both history and music that's hard not to catch. The King Can Drink The Harbor Dry is brilliant and inspired; a Wildy's World Certified Desert Island Disc. Don't miss it!

You can learn more about The Dimes at www.myspace.com/thedimes or http://www.thedimes.com/. The King Can Drink The Harbor Dry drops on December 1, 2009. Keep an eye on the Store section of The Dimes’ website for purchase information

Never heard of 'em.
They are wonderfully musical.
Thanks for the review; you've done me (a music lover) a service.