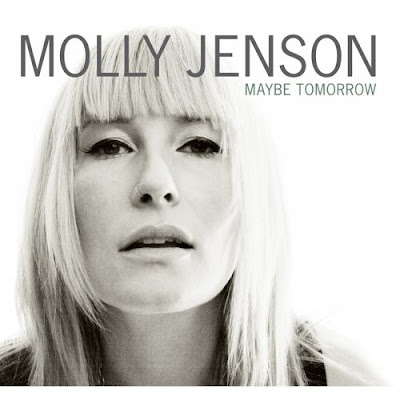 Molly Jenson came to our attention because of her duet with Sherwood's Nate Henry on that band's Worn (from their debut album, Qu, which we reviewed here.) We were so intrigued by her voice we wrote Jenson and asked her to submit an album for review. We're apparently not the only ones impressed, as Jenson continues to wrack up the accolades. The 2007 “Best Acoustic Act” from the San Diego Music Awards was named by Teen Vogue one of the three best new artists on MySpace that same year. In 2008, Jenson’s song Give It Time was selected to be part of the Freshman Survival Kit, given to incoming college freshmen around the country. She also had songs selected from the soundtracks of NBC’s Knight Rider and the CW’s Privileged. Jenson kept the momentum rolling into 2009 with the release of her debut album, Maybe Tomorrow. With a growing fan base on three continents (North America, Europe and Asia), the sky’s the limit for Jenson.
Jenson has a voice that falls somewhere between Sarah Harmer and Chantal Kreviazuk; a pleasant sound with enough texture to make you sit up and listen more closely. She opens Maybe Tomorrow with Give It Time, a song of wisdom in a gentle but catchy pop arrangement. This is a great lead track and definitely has legs as a single. Beginning Here is a melancholy tune with a pleasant melody. Jenson's voice slides across the vocal line with an ease that's breathtaking. The texture and beauty of her voice are perfect for the song. Maybe Tomorrow finds Jenson in a magical moment full of hope, longing and vulnerability. All shine through in a solid pop song that's more powerful and subtle than you might think at first blush. Jenson hits a bit of Mix-Tape magic on Thinking Of You; a catchy, bouncy love song with an unforgettable chorus. The vocal harmony work here is a real treat; with the right breaks, Thinking Of You could be a major pop hit.

Jenson goes for a fingerpick waltz on And You Were, a love song that works without sounding mushy or cliché. It's a song about the perfect day with the perfect someone. We get a change of pace on The Edgy 8 Ball Song; big crunchy guitars and a Suzanne Vega style narrative about a run-in with an ex are the order of the day. It's a decent song, but definitely divergent from the album style to this point. Alongside You is another potential single; A song about the feeling that accompanies love where you feel like you can do anything as long as the appropriate person is by your side. Alongside You (Part 2) is a melancholy and turbulent epilogue complete with full orchestration. It's a pretty and intriguing contrast to the original song.

I'm Sorry For Me is a musical mea culpa of sorts; it almost sounds like unrequited love from the view of the one who can't return the feelings. The song is beautifully written and intelligent; full of disappointment and regret. Jenson is joined by Jon Foreman of Switchfoot in a great duet on Do You Only Love The Ones That Look Like You. The song wants to be a country tune; here it's presented in a mild Americana arrangement. Either way it's a great tune. Thank You My Friend is a Jazz/Pop hybrid in the style of Norah Jones. The dynamics here are great, and there's real licensing potential for this song. Jenson closes out in a flash of musical brilliance on Wait For You Here. The ultimate act of love can be patience, particularly in a relationship where one person needs time. This song displays patience without judgment, or foolishness, depending on your perspective. It's a nuanced, mature and beautiful piece of songwriting, whatever you think of the motives.

We requested Jenson submit her CD because of her voice; such things are always hit or miss. Luckily for us, Jenson turns out to be a first-class songwriter as well. Maybe Tomorrow is a brilliant debut, full of texture, nuance and honesty. The arrangements are well-done and each a perfect fit to the lyrics they are married to. Jenson herself is charming, with a voice you could listen to all day. Make sure you spend some time with Molly Jenson and Maybe Tomorrow. You'll be glad you did.

You can learn more about Molly Jenson at http://www.mollyjenson.com/ or www.myspace.com/mollyjenson. You can order Maybe Tomorrow from Amazon.com as either a CD or download. Downloads are also available from iTunes.
Posted by Wildy at 6:02 AM