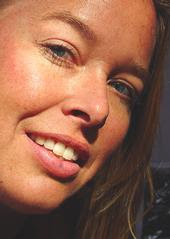 Margot Malia - Lava Moon
1999, Margot Malia
Margot Malia Lynch is a native of Greenfield Center, NY (just over the hill from Saratoga Springs) who spent much of her life playing the music of others as a classically trained pianist and violinist. It wasn't until her late 20's that Malia picked up a guitar and started writing songs as a catharsis from a failed long-term relationship. Malia recorded her debut EP, Lava Moon, in Boston in 1999. Lava Moon has never before been reviewed and has only been available at local shows in Upstate New York over the last ten years. Malia is finally contemplating the writing and recording of a new project and thought it might be time to dust off Lava Moon for a wider audience.

Lava Moon is a picture of the artist as an early work in progress. The album features just Malia and her guitar, and Malia's guitar skills at the time didn't extend beyond chord changes and strumming, but show a definite ear for melody and progression in songwriting. Malia's voice is warm and sensuous throughout, alternately taking on the earthy quality of a Grace Slick or the flighty quality of Tori Amos. Lava Moon itself is a treatise in Feminist and Naturalist ideology (treating them as intertwined rather than as distinct). Lava Moon is about the empowerment of women; the finding of value in self rather than in the projections of society and a connection to the natural world. The album opens with Be A Light Unto Yourself. This is a great start that will earn comparisons to some of the more rambling material from Jefferson Airplane. The song itself is limited by the sparse instrumentation and would be interesting to hear how Malia might re-interpret it ten years on.

Power is a song of thanks to the divine feminine aspect, focusing on lava as a source of power or almost a life's blood for the earth. Multi-dimensional opens as a feminist treatise but becomes more of an encouragement for self-empowerment. The song is written for female listeners and beseeches listeners to see themselves as more than objects of society's fancy. I would guess this might have been one of Malia's early attempts at songwriting as it's clear she was more focused on message than musicality here, but the song has real potential. Tyger is in the same boat as Be A Light Unto Yourself; a promising song limited by the instrumentation here. Pele might be the most intriguing song on the CD. Pele (volcano/goddess) is representative of the power of women, the planet and all of nature. Lava is the planet's lifeblood (a theme also in Power, and the volcano's core is compared to a womb. This mostly spoken-word piece is dynamic and engaging, and gives you an idea of how Ani DiFranco might have sounded if she grew up 20 years earlier.

Lava Moon is an early rough sketch of an American Primitive musician. Malia was still very much learning her craft at the time Lava Moon was made, and yet she showed very strong potential as a songwriter and performer. Lava Moon is the sort of introduction that leaves us here at Wildy's World very curious about the future of Margot Malia. I don't know if significant popular reach is likely (although it's impossible to tell what's transpired artistically in ten years without hearing new material), but Malia is a distinctive, artistic voice as a songwriter, and her voice is definitely a draw. Lava Moon is worth investing a little bit of time in, although it's probably more for the ladies (if you're a member of the He-Man Woman Haters Club you definitely won't like it). Here's hoping Margot Malia treats us to new material soon.

You can learn more about Margot Malia at www.myspace.com/margotmalia or http://www.margotlynch.com/. Lava Moon is available directly from Margot Malia. Contact her through her MySpace page for additional information.
Posted by Wildy at 5:20 AM