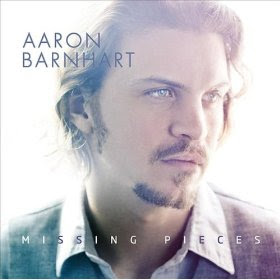 Aaron Barnhart is on a track for big things. His debut album, Missing Pieces, came out in May on “Indie” label Bonded Records. Indie is in quotes because Bonded is owned by UMG, but that’s an article for another day. Barnhart is being put out there as the next teen dream, and he may well be. With production by Stuart Brawley (Michael Jackson, Don Henley, Celine Dion, Josh Groban), it’s clear that the folks at Universal Music are betting heavily on Barnhart’s success.

Missing Pieces opens with Day In Day Out, featuring a hook-filled, alt-pop melody that will stay with you. Barnhart has a voice you want to listen to and has a very radio-friendly writing style based in piano-fueled Rock and ballads. Missing Pieces is a song of angst; a passive generational missive on all that isn't happening. Barnhart sounds a bit like John Ondrasik of Five For Fighting here. Painkiller is a non-traditional love song written in a Southern Rock style that you won't soon forget. One More Second Chance is fairly typical as a ballad except that it sounds like it might have been originally written as a country tune.
The Water's Edge is my favorite song on Missing Pieces, an impassioned tune that longs for redemption in the revival of a failed relationship. The Water's Edge is a beautiful piano-based ballad that misses the syrup boat and may gain a lot of attention for Barnhart. Another Day is a close second for favorite song; a 1970's style rock tune with orchestral aspirations where Queen meets Chicago. The vocals here show Barnhart as his most dynamic.

Aaron Barnhart has an ability to connect with the listener even though a medium as cold and distant as a CD. His voice, at his best, is highly memorable, particularly as he moves into his upper range. Missing Pieces is aptly titled. When songs work they're amazing, but there are a few songs here that just don't. Barnhart's sound has distinct commercial potential, and his continued development as an artist will give him great opportunities to realize that potential. Missing Pieces is a strong start.
Rating: 3.5 Stars (Out of 5)

You can learn more about Aaron Barnhart at www.myspace.com/aaronbarnhart or http://www.aaronbarnhart.com/. You can purchase Missing Pieces at Amazon.com, or download the album through iTunes.
Posted by Wildy at 5:10 AM