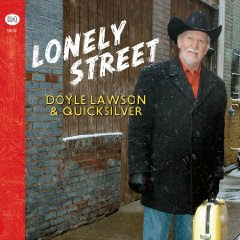 In an era when no one artist stays dominant in any musical category for more than an album or two, Doyle Lawson & Quicksilver's longevity and persistence is astounding. Inspired early on by the legendary Bill Monroe, Lawson has built a 30-year recording career with Quicksilver, and to say it's a highly decorated career is an understatement. Between the years of 2001 and 2007, Doyle Lawson & Quicksilver is the only group to take home the Independent Bluegrass Musician Association's award as Vocal Group Of The Year, racking up a total of 14 IBMA awards in the past 13 years. Lawson himself has been a fixture in the bluegrass world for 45 years, receiving multiple GRAMMY nominations and a National Endowment for the Arts National Heritage Fellowship, the highest honor affords by that organization to traditional folk artists. 2009 sees the release of Lawson's latest release with Quicksilver, Lonely Street. The awards will come, but for Dawson it's always been about one thing: the music.

Even 45 years into a storied career, Doyle Lawson has a classic Country voice that’s as clear and true as ever. Lonely Street opens with what can only be described as a prologue in Monroe’s Mandolin. An open tribute to Bill Monroe and the foundation he laid for bluegrass pickers everywhere, Lawson gives a master class in the high lonesome sound that was Monroe’s trademark. It’s a fitting tribute, and the instrumentation and harmonies here are gorgeous. Sound aside; Lawson knows a thing or three about story telling in song. Best example might be Johnny & Sally, which follows a classic formula for the style and yet manages to be sweet in an old-fashioned sense. It’s a witty tune about forbidden love and the good things that come out of it sometimes. The Human Race is a philosophical tune that reminds us what’s important while also reminding us how short-sighted people can be at times. (“Are we losing the human race / Do we ever really learn from our mistakes / Who’s ahead, who’s behind, will there ever be a finish line / are we losing the human race?”).

Lawson & Quicksilver brings us through Old-time country (Yesterday’s Songs), Gospel (When The Last Of Our Days Shall Come) and a good old back porch, flat-picking instrumental (Down Around Bear Cove). An added treat are the two covers presented here. Porter Wagoner’s Big Wind goes back to Country’s early roots for a classic rendition of a great song. Marty Robbins’ Call Me Up And I’ll Come Callin’ On You might quietly be one of the best songs in the Country Music Canon. Lawson puts his own imprint on the song without losing its spirit.

The respect Lawson receives in the industry and the awards that he’s received are a testament to the quality of the music he makes. Doyle Lawson & Quicksilver are legends. As Lawson moves into the latter half of his fifth decade in music, he shows no signs of slowing down. Lonely Street shows a performer and band at the top of their game.

You can learn more about Doyle Lawson & Quicksilver at http://www.doylelawson.com/. You can purchase a copy of Lonely Street at Amazon.com.
Posted by Wildy at 5:10 AM