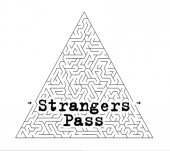 Strangers Pass is a power-trio that derives its sound from a wealth of influences. Singer/guitarist Robert Sadowski credits Hendrix, David Gilmour, Jimmy Page, Tommy Iommi and Brian May, whereas Bass man Bob Mikkelsen grew up on a hybrid diet of The Beatles, Pink Floyd, Metallica, Rush and Yes. Drummer Frank Gattuso leaned toward John Bonham and Bill Ward, but also had a strong affection for James Brown skins masters Clyde Stubblefied and Jabo Starks. Strangers Pass came together at an impromptu jam session in August of 2008 that was meant to be for fun but turned out to be for good. 2009 sees the release of their debut, self-titled EP. The styles and sounds that influenced each band member combine here to create a hard nosed Rock N Roll album with subtle influences and pensive interchanges.

Strangers Pass opens with Alone, an aggressive rocker that sounds a bit like what Black Sabbath might have sounded in their early, garage days. Strangers Pass does an about face on 400 Monroe, a moody and introspective rocker ala Pearl Jam. Snake Charmer is another dark and pensive rocker that calls out a manipulator. See Them All sticks to the dark musical aspect that runs through the EP, rebounding for an almost hopeful, ambient chorus before ricocheting back into darkness. Through The Maze finds Strangers Pass ending in a melodic and unthreatening fashion, with an upbeat yet mellow performance that sounds more commercial alt-pop than anything else on the EP.

Strangers Pass does an imitation of the month of March on their self-titled EP: In like a lion, out like a lamb, although Through The Maze does show some verve in the chorus. When I read the bio on Strangers Pass and saw the range of influences I was very excited. Here is an opportunity to take some grand musical traits and construct something new and original. In fact, the opposite has happened. Strangers Pass have taken the core elements and wiped away the things that don't match, much like finding the universal elements on a musical Venn Diagram. The result is essentially a mellow grunge album that sounds something like Pearl Jam, Soundgarden, Temple Of The Dog, etc. It's a good listen, but not necessarily what you'd expect.
Rating: 3 Stars (Out of 5)

You can learn more about Strangers Pass at www.myspace.com/strangerspass.
Posted by Wildy at 5:00 AM