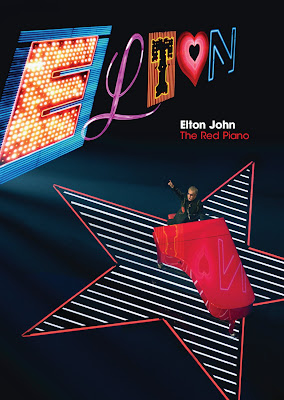 You might not have been able to make the trip to Las Vegas to see Elton John's standing show, but no matter. Island/Mercury brings the show home to you on The Red Piano, released on DVD and BlueRay this month. John's Vegas show (also entitled The Red Piano) saw a run of over 200 sold out shows, breaking attendance records on the strip and raising the bar for the next generation of house performers there. It's easy to see why, John has had a long and storied career full of gold and platinum records and continues to outsell acts less than half his age in a dramatically changed music marketplace.

The DVD features fourteen tracks; some of the biggest hits of Elton John's career, including Bennie And The Jets, Daniel, Rocket Man, Candle In The Wind, B!tch Is Back, Saturday Night's Alright For Fighting and Your Song. Sadly, Goodbye Yellow Brick Road isn't included here. For the enhanced experience, pick up the BlueRay version, featuring a 50 minute documentary The Life And Legacy of Elton John, as well as original stage projections created for the show by David LaChappelle. While there are some definite gaps in the material offered in this performance, it is highly representative of Elton John and his status as one of the elder statesmen of Rock N Roll.

Elton John has 1Tony, 1 Oscar, 1 Golden Globe and 5 Grammys to his name. The Red Piano is a testament to the talent and showmanship that got him there. While not as over-the-top on stage as in his 1970's heyday, Elton John still gives a great show. The Red Piano is a must for fans, and a great introduction if you somehow don't know much about the artist. The Red Piano is highly recommended.

You can learn more about Elton John at http://www.eltonjohn.com/. You can purchase The Red Piano at Amazon.com or anywhere DVDs are sold.
Posted by Wildy at 4:55 AM