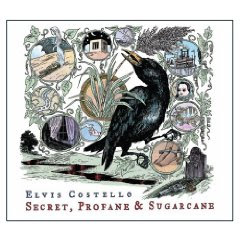 Elvis Costello is a pretty nuanced songwriter and performer for someone who started out his career as a punk rocker. Costello was never truly punk, and quickly became one of the pioneers of the style called “New Wave”. From the perspective of thirty or so years later, it’s very clear that there is no single, viable classification for Costello (nee Declan Patrick MacManus). Costello is a musician first and foremost, and in the same vein as artists such as Sting and Billy Joel, has continued to create himself (and his own musical cannon) with each successive album. Costello’s newest album, Secret, Profane & Sugarcane, returns to the acoustic roots of a genre known as Americana. Mixing country, bluegrass and folk, and working with super-producer T-Bone Burnett, Costello has managed to create an instant classic.

Secret, Profane & Sugarcane opens with Down Among The Wine and Spirits, with Costello sounding like he was born of a union of folk and country styles. Complicated Shadows is presented here in much the same fashion, but sounds like classic Costello with a string-band arrangement. The snappy hooks, muted anger and mild rock swagger are all here. I Felt The Chill is a bit more traditional in sound, and marks Costello’s second recorded collaboration with Country legend Loretta Lynn. My All Time Doll sounds a bit like something you’d expect from Kurt Weill if bluegrass and country were his genre. It’s an especially dark song of obsession. Costello offers up a special treat with Hidden Shame, a song Costello originally wrote for Johnny Cash (released on Boom Chicka Boom).

Her Handed Me a Mirror is from the project “The Secret Songs”, songs Costello has written about Hans Christian Andersen for the Royal Danish Opera’s bicentennial celebrations in 2005. This particular song is about Andersen’s fascination with singer Jenny Lind. How Deep Is the Red stays with this topic in a song of deep longing that is touching. Lind rears her head again on She Was No Good, a musical look at the reality behind her somewhat beatific reputation.

Costello wrote two songs with producer Burnett for the album. The first, Sculpture To Sugarcane sounds like the theme song on an old-school southern politician and fits in well with the sort of material Randy Newman has been writing for years. The other Burnett collaboration, The Crooked Line, is a song about fidelity that lacks Costello’s usual vitriol or ironic slant on the subject. Costello closes out with an interesting selection, a Larry Coleman and Joe Darien waltz entitled Changing Partners that Costello first heard performed by Bing Crosby many years before. It’s done as a classic country tune here and is better for the treatment.

As a music fan I caught on to Elvis Costello quite late. In his 1980’s heyday I had my head stuck firmly in the clouds of arena rock, but the man is a consummate performer and musician. If you just look at the list of people he’s written songs for and with you’ll understand the sort of esteem Costello has from his contemporaries. Secret, Profane & Sugarcane is the sort of album that no established artist has to make. It’s brave; a risk. It fits perfectly with the profile and persona Costello has built/cultivated over the course of his career, and it’s a smashing success. Secret, Profane & Sugarcane is a smash; a Wildy’s World Certified Desert Island Disc, and yet another reason for artists of this generation and the next few to follow to cite Costello as an influence.

Hey I didn't know Elvis Costello had a new album! I must check it out, you seem to like it a lot:)

Yeah, Costello has always been quite ecclectic which gives him a unique sound. I feel he is more appreciated now even than "then"...or at least more people finding out about him etc.