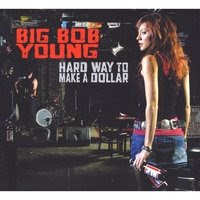 Big Bob Young - Hard Way To Make A Dollar
2009, A Man Around The House Records

Big Bob Young is a blue collar songwriter who never became a professional musician until the age of 27. Now 53 with his children grown, Young is making time for his first love, music. On his way to today Young has been an airman, a soldier, a farrier, a student, a clown, a telegram singer, a father and husband, a jazzman and a country band leader, and the tough-nosed songwriter with the well-worn voice has a lot to say. Young's backing band includes Michael Webb (Gary Allan) on anything with keys, Rick Lonow (Poco) on drums, Carlton Moody (Burrito Deluxe) on acoustic guitar/mandolin and Colin Linden (Bruce Cockburn) on guitar, slide and Dobro. 2009 sees the release of Big Bob Young's debut album, Hard Way To Make A Dollar.

Hard Way To Make A Dollar is a working man’s album; there’s no pretense or glitz, just no-nonsense story telling and a delicious blend of Country, Blues and Rock N Roll. With a sound more akin to Austin, Texas than Tullahoma, Tennessee, it’s easy to see that Big Bob Young’s style could have broad appeal. Hard Way To Make A Dollar opens with Ship Of Fools, a smooth Blues/Country mix featuring strong guitar play and a highly memorable melody. Best Of A Bad Situation is built on a blend of Country, Blues and early Rock N Roll sounds that would feel right at home in any old-school honky-tonk. Somewhere Tonight is one of those songs that will resonate with a lot of people. It’s about the power of faith or prayer. Young tells a moral in song without making it an issue of one particular religion; yet displays how faith-in-action has the power to change lives.

Hard Way To Make A Dollar is a great honky-tonk style tune about a waitress working hard to make ends meet. The song has a gritty realism without losing the heart of the protagonist and is touching while asking no sympathy. Mississippi Nights is a classic could love/tragedy song that regrets the one who got away. Young even gets in a bit of Swamp Country on Green County Stomp. Perhaps the most intriguing tune on the CD is I Call It Love, which ends up sounding like classic Van Morrison. I Call It Love is profound and sweet without becoming syrupy or cliché; A ballad not so much about a person or particular instance but the many faces of love. The most entertaining song on the disc is Can I Take You Home; a bit of New Orleans seeps into this witty and intelligent come-on song. The album closes out with Stand Up, a gospel tune straight out of the old south.

Throughout Hard Way To Make A Dollar, Big Bob Young is a gruff-but-friendly story teller with an easy approach and an insightful eye. The songs presented here are rooted firmly in country music, but make free use of Rock, Blues and even Gospel as each song warrants. As a story-teller, Young is on a par with Springsteen. Musically, the selection here is dynamic enough to keep even the most jaded listener interested. Hard Way To Make A Dollar is a must-hear CD, a Wildy’s World Certified Desert Island Disc. Make sure you take a little time to check out Big Bob Young.

You can learn more about Big Bob Young at http://www.bigbobyoung.com/. You can purchase a copy of Hard Way To Make A Dollar at CDBaby.
Posted by Wildy at 5:20 AM