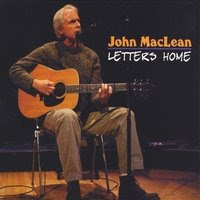 John MacLean finds inspiration for songwriting in his own life and experiences as well as from the world around him. The Baltimore native lives in New England with his family, and released his debut album in 2008, Letters Home. MacLean has a knack for intelligent lyrics and easy, down-home arrangements that seem like they walk write from the American Folk Songbook.

MacLean has the singer/songwriter aesthetic down pat, telling stories from that same comfortable perch as greats such as Woody Guthrie, James Taylor and even Dylan. MacLean wraps his stories in comfortable arrangements that are pleasant to listen to and seem to support the stories they purvey. Letters Home opens with Blind Willie McTell in a classic sounding folk arrangement with country and blues accoutrements. Still Waters has a classic country/folk feel to it with a lilting melody that will stick with you like oatmeal on a cold day. New American Way is an apropos song for difficult financial times. Focused on corporate greed and the divergence between rich and poor, the song tells an allegorical song of the stripping away of America's working class jobs and opportunities, complete with members of the corporate community who refuse to face up to their decisions. This issue has been addressed in song numerous times in the past twenty years, but rarely with so much grace.

Touch A Name On The Wall is a highly personal and poignant tribute to fallen Veterans of the Vietnam War from a Vet who came home. Scores of tributes exist, but MacLean's personal missive has more power than most. Add in a highly listenable country arrangement and you have a very special song, indeed. Liar's War (Letter Home) takes on the Iraq War in contrast to Vietnam, praising the soldiers and the fallen while denigrating the reasons for the conflict. Once again, MacLean has the standing to speak on these issues as a Veteran and the brother of a fallen Vet. MacLean indicts the motives of both the Nixon and Bush governments without ever mentioning their names or specifying charges. It's this subtlety that turns Liars War, and Letters Home in general, from a typical folk album into a masterful collection of songs. Other highlights include Beyond Our Time, Pancho And Lefty and First Met You.

John MacLean writes with a poignant pen, sliding his meaningful and weighty stories into songs crafted in gentle tones and pretty home style melodies. Letters Home didn't strike me the first time I listened to it. This is not an album you listen to casually. MacLean has put his heart and soul into each song, as if into a musical diary. If you aren't really listening then you'll never get the full sense of Letters Home, one of the finest original traditional folk albums of the past few years.

You can learn more about John MacLean at http://www.johnmacleanmusic.com/ or www.myspace.com/johnmacleanspace. You can purchase a copy of Letters Home at www.cdbaby.com/cd/johnmaclean.
Posted by Wildy at 5:20 AM