Review: Angi West - Love Is A Special Way Of Feeling 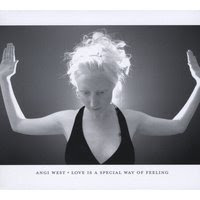 Familiar to readers of Wildy's World from her background vocal work on Jar-E's Chicas Malas, Angi West is as distinctive in appearance as in sound. West looks like a large child or a doll on first glance, although her eyes reveal a depth and maturity that her features can't convey. It's when West opens up her mouth and sings that you realize that you're dealing with a distinctive voice; an artist. West's latest CD, Love Is A Special Way Of Feeling, displays West as she is, an eclectic and quirky artist with a sound you won't soon forget.

West's songwriting and performing style falls somewhere between Kate Bush, Tori Amos and Liz Story. West has operatic training and writes in a semi-Baroque style that includes aria-style runs and resolutions. Genres don't really exist as hard boundaries for West; they're more like a palette where the colors have all mixed to create something you've not quite seen before. West can be lyric and sweet or jarring and quick and has a frenetic, almost stream-of-conscious tendency in her lyrics. The album opens with Your Hands. While this song is difficult to read, it sounds like someone in an abusive relationship who finds solace in the striving to save her partner from himself. It's a jarring narrative sung in West's occasionally sweet, occasionally troubled voice. Same Speed is about bonding with people like yourself. In this case two school mates who aren't as physically gifted as their peers find solace in one another. The song is written almost in the voice of a child, working up to a sort of fumbling, clumsy affection.

Lucy And Linnea is a modern folk opera with a discordant, ambient underscore. The song presents a powerful voice for moving forward in the wake of mistakes. ("So we leave the wrong and take the right / and the darkness to the night."). No One is a rebelliously optimistic love song built on sparse instrumentation and a strong if unusual melody. Let Them Sleep incorporates a bit of an Appalachian feel that refers to a grand love that calls to us all, although some sleep through the call. Instead of proselytizing others, West admonishes those in the know to let the sleepers slumber. One Hand is a straight-up Rock/Pop song with Tori Amos style piano construction that is instantly recognizable.

West has a little vocal fun on Brand New Face, a delightful round with some wonderful harmonic intricacies woven around an incessant but vaguely muted rhythm. Coming out of this West springs to the theatrical side, offering up Carter's Song. This grand love song matches the complication of the emotions it carries with an intricacy of composition that's appropriate to back up a highly poetic set of lyrics. I'll Wait goes for deep devotion in a love song strongly reminiscent of Kate Bush. For all that's come before, Angi West saved the best for the last full song on the album, Home In Heaven. This highly intriguing tune sound Celtic in origin, and West finds male voices to recreate the hum of a bagpipe underneath. The song is aurally stunning as an essentially A Cappella piece. West has a bit of fun with listeners with a hidden track that gives the album it's name, Love Is A Special Way Of Feeling. It's West and a bunch of (presumably) friends singing together at a party; a kitchen party song where the chorus is easy and everyone chimes in a verse, for better or for ill. Innuendo and wit vie with "really good attempts" for an experience that's fun to listen to (and probably even more fun to participate in).

Angi West is a ferocious songwriter, honest and forthright to her core as an artist, singer and songwriter. Love Is A Special Way Of Feeling is unique in sound and approach and driven wholly by the personality and charisma of west. Her voice is distinctive and memorable and a pleasure to listen to. The original song construction fed by Opera, Appalachian Folk, Americana and whatever bits of musical stew West can find is unlike most anything you've likely heard. Love Is A Special Way Of Feeling will grab your attention and hold it though many listens. Bravo.

You can learn more about Angi West at http://www.angiwest.com/, angiwest.blogspot.com, or www.myspace.com/angiwest. You can purchase a copy of Love Is A Special Way Of Feeling at www.cdbaby.com/cd/angiwest2.
Posted by Wildy at 5:20 AM