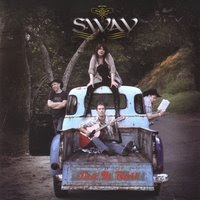 Southern California quietly has built a thriving country music scene over the years. While not gaining the attention or reverence of Nashville or Branson, Orange and L.A. counties are home to a thriving country music community. Gina Quartaro and Perry Martin were both pieces of the puzzle in SoCal, but it wasn't until they were introduced by their Chiropractor just about a year ago that they moved to the head of the pack. As 2/5 of Sway, Quartaro and Martin have melded into a dynamic singing/songwriting/performing force majeure that is bound to turn a spotlight on the scene as a whole. Quartaro was raised on Hank Sr., and Martin cut his teeth touring Vietnam with The Donny James Show and performing on television for the Armed Forces Television Network. Together, they've found a sort of musical alchemy that's almost fairy-tale quality. The former Nashville Star contestant, Sway, released its debut album, Let It Roll in 2009. Look out Nashville, her comes Sway.

I've been waiting for a while for a band and song to come along that will ultimately prove what country radio is made of, and I've finally found it. Cowgirl Scene, the opening track from Let It Roll, should put Sway firmly on the Country music map. Suffice it to say that on a major label with the right marketing push, this is a #1 hit. It will be the shame of the industry if that doesn't happen, because this might just be the best Country/Pop offering of the last few years. It's a girl’s night out song, and so infectious you won't be able to get it out of your head. Let It Roll comes from a more introspective place, reflecting a positive outlook based in self-sufficiency. The song is very tuneful and well-written; the sort of personal anthem that people might take to in difficult times.

If I Knew is in the classic vein of tragic country songs; a musical letter from a widow to her deceased husband about their daughter. Quartaro gives a moving vocal performance, with Perry Martin answering in almost ethereal tones. Get the tissues ready for this one. Sway swings from this bit of personal darkness to In The Hands Of Love, a highly optimistic song about the power of humanity to rise above its own petty nature in response to one another's needs. This is another song that should be getting serious airplay, although its perhaps a bit too upbeat and positive thinking for a cynical radio industry.

One of the things I enjoy most about Sway is their willingness to break the mold, musically. Check out I'm Over You, a song with distinct country coloring but which smacks of an almost Fleetwood Mac pop sound. Quartaro is entirely in her element here in a mildly driven pop/rock song in Americana clothing. This particular melody will inspire you to sing along and will keep recurring in your mind. Perry Martin takes over lead vocals on This World. Martin's voice is distinctive, part Leonard Cohen and part crooner. This World is a highly positive song that again hits the theme of people overcoming their own base natures, and how that ability is a perennial marker of hope. You'll also want to be certain to check out More Than Enough and Love Takes Time.

Whether it's Quartaro's lead vocals, Martin's harmonies, the songwriting, the energy or any other quality you care to name, Sway is a first class Country/Pop outfit with significant commercial potential. If the industry doesn't embrace this band and give them the support they need then shame on the establishment. Sway has found a dynamic blend of classic Country and Pop that is pop gold. Let It Roll is a dynamic and wholly enjoyable debut.

You can learn more about Sway at http://www.swaymusic.com/ or www.myspace.com/ginaquartaro. You can purchase a copy of Let It Roll at www.cdbaby.com/cd/swayband.
Posted by Wildy at 6:23 AM

Sway is everything the author of this review says and more! These guys are amazing and should be on country stations across America!!

I agree whole-heartedly. If you haven't heard of their music yet, you are truly missing out. Love you guys! Awesome job! :o) Tammy!

I knew they would really make it! This Band is 1 of my Favorites!
Will make it big, my feelings & all that have heard them.
Great Job Gina & Band!!
Love You Guys!
Lady K