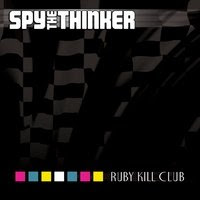 Jersey boys Spy The Thinker hit hard with their debut album, Ruby Kill Club, independently released in 2009. The hard-rocking trio draws comparisons to early Red Hot Chili Peppers and Incubus. There are no pithy nuances to be found here, just straight ahead alternative rock. Playing out in large local markets such as New York City and Philadelphia, Spy The Thinker has generated a fair amount of excitement for their live shows.

Ruby Kill Club opens with Wake Up, crusty pop/punk at it's finest. This is a highly commercial tune that seems to draw comparisons between fame and addiction, and is insightful and musical in spite of the crunch. Skipping Stones has a sound that reminds me of The Lowest Of The Low. Lead vocalist Matthew has a dynamic voice that's gruff and lyric all at once. After that things slow down a bit, with decent but not overly notable songs. Cloudless Cold is an interesting listen on the first go but doesn't make a lasting impression. Tourist practically dances out of your speakers in a catchy and moderately upbeat arrangement. The album closes with Nobody Buy Me, a lively rock song that hits the energy and interest level of the opening tracks.

Spy The Thinker finds the knack for highly listenable songs a few times on Ruby Kill Club, but also manages to create some pleasant but unremarkable moments here. The more introspective material is fine but just doesn't show the same type of intensity of energy as their better material. If Spy The Thinker could manage to maintain that energy level in the slower more thoughtful songs they'd have a killer album here. The material itself is good, but the presentation is uneven.

You can learn more about Spy The Thinker at www.myspace.com/spythethinker. You can purchase a copy of Ruby Kill Club at www.cdbaby.com/cd/spythethinker.
Posted by Wildy at 5:00 AM

2.5 out of 5 stars??? everything is positive about this review.. then you cap it off with 2.5 out of 5? is that a typo. explain urself. SPY THE THINKER IS GONNA BLOW UP!