Review: Sarah Brooks And Graceful Soul - Under The Bones Of The Great Blue Whale 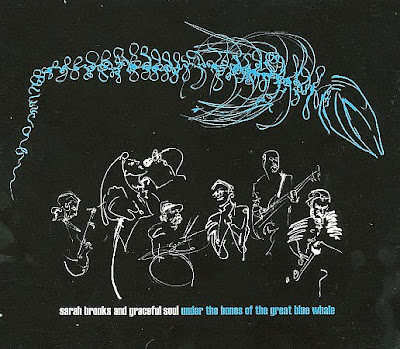 Sarah Brooks And Graceful Soul - Under The Bones Of The Great Blue Whale
2008, Whaling City Sound

You take classic material, an all-star band, a unique setting, a dash of luck and a vocalist with the command, power and soul of Sarah Brooks, thrown them all together and you get magic. Under The Bones Of The Great Whale is the ultimate document of this experiment in musical alchemy, and what a gem it is. Brooks has the sort of voice that transcends genre and time. Hers is a powerful instrument built for Jazz and The Blues, but also adept at R&B, Soul and Rock.

Under The Bones Of The Great Blue Whale opens with Brooks breathing new life into Sam Cooke's Bring It On Home To Me. This may be the most vibrant version I've heard since the original, and aficionados may fall on their knees proclaiming the second coming of Etta James. Burt Bacharach's Look Of Love gets similarly iconic treatment, with Brooks making the song in her own without stepping on the coattails on Bacharach's opus. Chain Of Fools might not quite threaten Aretha's classic version, but Brooks is at least in the same room with a faithful rendition built on a little more funk than the original. Even the Beatles get drawn into the belly of the whale as Brooks puts up a lively and fun rendition of You Can't Do That; which is most memorable for the breakdown in the middle where you get to hear what the band is made of.

At Last (Etta James) is one of the highlights of the disc. This is one of those songs you just shouldn't do unless you're good enough to pull it off. Listen to American Idol auditions from any season and you'll know what I'm talking about. Brooks is all diva here, bringing down the house with a virtuosic vocal performance that does James proud. For all of that, Amazing Grace takes things one step further. Brooks transcends the moment and takes the audience and those listening at home to a magical place for nearly eight-and-a-half minutes. Graceful Soul provides some of the magic, to be sure, but Brooks commands all attention for this song, and rightfully so. The cover of Sting's Fragile is also highly recommended; Brooks is able to provide vocal texture to the song that Sting could never quite capture, although this version lacks the urgency of the original. Other highlights include The Chicken and a moving instrumental version of Amazing Grace.

Every once in a while an album will come along and surprise you for how good it is and how it hasn't gotten more attention. Under The Bones Of The Great Blue Whale is just such an album. Sarah Brooks should be a national talent, and the musicians that make up Graceful Soul should be right there with her. If the great ladies of song of the 1940's, 50's and 60's are your thing, then Sarah Brooks is someone you absolutely have to hear. Even if you don't know or care about that era, I still recommend Sarah Brooks and Graceful Soul highly. All musicians make music, but this is what magic sounds like.

You can learn more about Sarah Brooks and Graceful Soul at http://www.sarahbrooks.com/. You can purchase a copy of Under The Bones Of The Great Blue Whale at CD Universe.
Posted by Wildy at 5:10 AM