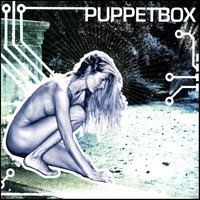 Puppetbox is the sort of band that makes you sit up and pay attention. Whether it’s the mix of electronic and organic (though still electric) instrumentation, the kazoos or the threat of total domination of the masses, there’s something special about this Brooklyn quartet. Ultimately it might be the fact that rather than writing for a market or niche, Puppetbox makes music that they would love to listen to. On their debut album, Puppetbox, Katie Johnston (vocals, accordion, guitar, kazoo); John Payne (guitar, vocals); Chris Tempas (synth, programming, vocals) and Mark Annotto (drums), let loose a storm of electronic/pop/rock/geek/buzzy sounds that will make you want to dance, swing, sway and otherwise have a good old time.

Puppetbox opens with Done By Numbers, a fairly straight-forward rock song with new-wave accents. Things get a little more interesting on the angry and intense Wifey. The chorus is highly memorable and has real commercial potential. Things get downright lethal on Kill You Dead, a highly commercial rocker with a serious new wave edge. Blue Or Black is a left turn from Puppetbox, introducing Katie Johnston as a lead vocalist and going for a more melancholy, quiet sound. Fire In My Loins is a mid-tempo rocker that doesn’t carry the energy the title might imply. Kimberly is another mid-tempo rocker with better results, although the energy level is still a bit flat here. The live track, Green Means Go, gives the distinct impression that as a live band Puppetbox comes across as a dynamic punk/new wave hybrid that plays well together.

Puppetbox seems to have good chemistry live, and it carries over onto the album at times, but there are also stretches that are flat. Puppetbox is a 50/50 affair, with about half of the material sounding like it had real energy invested in it and living up to the dynamic promise of the band, with the other half sounding like it might have been recorded in a low energy phase for the band. I suspect the energy level will be higher live, but it would be nice to hear more of those dynamics poured into the CD.
Rating: 3 Stars (Out of 5)

You can learn more about Puppetbox at http://www.thepuppetbox.com. You can purchase a copy of Puppetbox at www.cdbaby.com/cd/puppetbox2.
Posted by Wildy at 5:00 AM