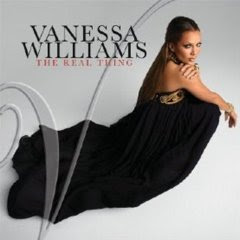 Vanessa Williams has had it all at one time or another. Miss America, Movies, Broadway (Kiss Of The Spiderwoman), a recording career, Television (Ugly Betty). Her voice has always been among the best in the business. Back in 2009 with an album of standards and should-be-standards, The Real Thing, Vanessa Williams proves for any who hadn't figured it out thus far that she might just be one of the most versatile and pre-eminent talents in entertainment.

The Real Thing is produced by Kenny "Babyface" Edmonds, and allows Williams to shine like the sun. Unlike many of the R&B/Pop artists of today, Williams doesn't need to impress you with meaningless runs and coloratura gloss. Digging in to a mix of Pop, Jazz and R&B, Williams' voice is more than enough in its natural state. The Real Thing opens with Breathless, a great, old school Pop/R&B ballad that finds Williams in perfect voice. Hello Like Before is a classic ballad in the vocal standard school of singing. You could picture Williams singing this one in a 1940's nightclub as easily as in the present day. I'd actually never heard this song before and was very impressed with the songwriting, so I was thoroughly unsurprised to find it was penned by Bill Withers.

Loving You finds Williams opening up her voice just a bit. The rendition here is a little bit raw and sounds amazing. The Real Thing could as easily be a jazz standard as a Broadway tune with its swanky attitude and sensuous nature. Close To You finds Vanessa Williams skating as close to vocal perfection as it’s possible to get. Make sure to check out October Sky, Williams' duet with Javier Colon, and Come On Strong. Come On Strong is the sort of song that could easily be dropped into any one of a dozen classic Hollywood romantic films and would seem perfectly at home.

Vanessa Williams is a consummate performer, and The Real Thing reflects that fact. Vocally flawless with near-perfect instrumental backing, Williams shines under the steady hand of Babyface Edmonds. I felt there were two or three songs on the album that, while nice tunes, weren't necessarily chosen well. Even on these Williams is able to make the mundane memorable. If you aren't familiar with Vanessa Williams as a singer, this is the perfect chance to get to know her.
Rating: 4 Stars (Out of 5)

You can learn more about Vanessa Williams at http://www.vanessawilliams.com/. You can purchase a copy of The Real Thing at Amazon.com or download it through Amazon MP3.
Posted by Wildy at 5:00 AM