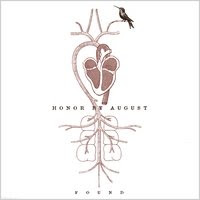 Based out of Washington, D.C., Honor By August has culled a reputation as one of the last bastions of mainstream Rock N Roll. In a day and age when most bands are looking to enhance their genre hyphenation by incorporating disparate sounds into songs, Honor By August offers a refreshingly classic pop/rock sound based on melody, harmony and great hooks. These efforts have already garnered Honor By August significant attention, winning the Billboard World Song Contest, gaining exposure on ESPN and sharing the stage with artists such as Bon Jovi, Hootie & The Blowfish, Edwin McCain, Peter Frampton and Third Eye Blind. Honor By August's sophomore album, Found hits the streets today. Honor By August might really be the next big thing.

There's a certain knack to songwriting in an ensemble; some groups never have it, some develop it over time, and some just click. Honor By August seems to have a magical connection wrapped up in their creative process that turns hooks into phrases, phrases into songs and songs into gold. Similar to bands like Matchbox 20, Semisonic, Hootie & The Blowfish and Third Eye Blind, there is a distinct pop sense that runs through everything they touch. Listen to the soaring choruses, bright melodies, gorgeous harmonies, intelligent and heartfelt lyrics, or any other quality you want to choose and there's a bit of magic there. Opening with the title track, Found is pure pop rock right from the start. Even amid the high quality songwriting and performances on Found there are distinct high points. Johnny (Pass Me Another) explores barstool camaraderie in an intelligent and emotional story song that is miles above the usual pop fodder. There You Were is the sort of love song that melts hearts. It's not a sappy ballad, but a mid-tempo Pop/Rock tune with a soaring chorus that is bound to be on most every mix tape made in 2009.

Say That It's Over is a catchy plea to put an end to war, complete with a chorus reminiscent of Toad The Wet Sprocket on steroids. Hometown Heroes takes the pop sensibility to a new level on a song that will be new to listeners but is instantly recognizable nonetheless. It details one of the dreams of any performer: coming home a star. Awake & Alive, the closer, is a poignant and quiet moment of reflection on origins and identity before Honor By August says goodnight. Other highlights include Half A Day Away, See This Through and Love Lies Awake.

Honor By August has a distinct polish to them that belies their Indy status. Found is the sort of album that makes major labels come calling. With the right exposure and a lucky break or two Honor By August could be one of the most popular bands of 2009. Found leaves me very excited for the future of Honor By August, and wanting to track down their first release. Don't pass this one by.

You can learn more about Honor By August at www.myspace.com/honorbyaugust or http://www.honorbyaugust.com/. You can purchase Found at www.cdbaby.com/cd/honorbyaugust2.
Posted by Wildy at 5:21 AM