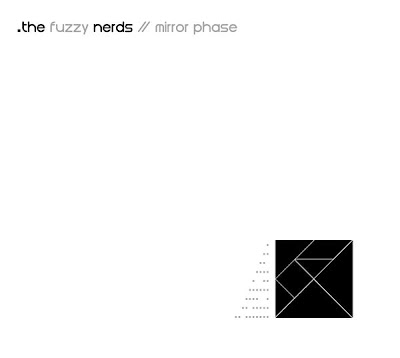 The Fuzzy Nerds are an experimental, Alt Rock trio from Greece. Petros Vyzoukis, Maria Choleva and Kostas Dimitriou have a very smooth, melodic sound that gets wrapped up in its own melodic intent. Their latest release, Mirror Phase, continues in the vein that has provided them a consistent following since their inception in 1994.

The Fuzzy Nerds are aptly named. The music on Mirror Phase is fairly uniform in sound, taking the easy, almost ethereal sound of groups like A-Ha or The Thompson Twins and mixing it with some fuzzy guitar sound to create songs that are pleasant to listen to but remarkably homogeneous in sound. Mirror Phase opens with Plastic, a dream-rock song with a dance beat that will get your feet moving but probably fail to make a significant impression. Lying Underground is a fairly upbeat and peppy song that will stick out in your mind. This highly melodic song is full of a lot of movement and probably would have been a pop staple if it were written and released in the late 1980's. Beautiful has a bit of frenetic energy running throughout and is probably one of the more pop-oriented songs on Mirror Phase. Other songs of note are Narcissism, Mirror Phase and 117.

The Fuzzy Nerds seem like they are as interested in playing with sounds as they are with the writing process. Mirror Phase is a study in "because I can" song construction. I honestly couldn't connect with much of it, but if you're into mellow rock with ambient undertones then you may just love it.
Rating: 2 Stars (Out of 5)

You can learn more about The Fuzzy Nerds at http://www.fuzzynerds.com/ or www.myspace.com/thefuzzynerds.
Posted by Wildy at 4:55 AM