Going Back to Roseland in Style 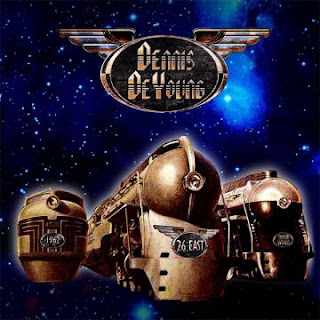 Dennis DeYoung - 26 East, Volume I
2020, Frontiers Records
During the late 1970's and early 1980's there weren't many bands who could keep up with Styx.  From 1977 to 1980 Styx released four consecutive multi-platinum albums (The Grand Illusion, Pieces of Eight, Cornerstone and Paradise Theatre.)  Styx was a mix of musical contradictions and complements that worked, in large part, due to the vision of Dennis DeYoung.  Forty years later, and 20+ years since DeYoung was pushed out of the band, Dennis remains the heart and soul of Styx to many fans.  His shows recreate the past for Styx fans 150 nights per year (or did pre-Coronavirus), and do so with an energy and vocal intensity that few 73 year old could match.
DeYoung thought he had hung up his spikes for new material under old friend Jim Peterik (Survivor, Ides of March, Pride of Lions) pulled him back in from the recording pasture.  Working together, DeYoung and Peterik wrote close to 20 songs.  One, "Proof of Heaven", appeared on Peterik's 2019 album Winds of Change.  DeYoung was just getting started, however, and dropped 26 East, Volume I in late May.  It mixes the best of Styx' rock sound with classic DeYoung ballads and wonderfully tongue-in-chic rock/pop.
The album opens with "East of Midnight", a Jim Peterik tune enhanced with some classic DeYoung keyboard work.  The song fits nicely with DeYoung's looking back to look forward concept album, and sounds like a classic Styx tune.  "With All Due Respect" unleashes DeYoung's dad-humor style of the cognoscenti of television's talking head class in an irresistibly danceable rocker.  The chorus, "with all due respect, you are an asshole..." rings true with most people regardless of your thoughts on current events.  "Run For The Roses" and "Damn That Dream" take altering looks at the pursuit of success; the former a Pilate-like soliloquy on what really matters, the latter a paean to siren call of the life of a creative.  These two songs perhaps perfectly capture the tension that has driven DeYoung all of his (now eight) decades.  Longtime fans will appreciate DeYoung's ode to the American dream, "The Promise of This Land", calling for all Americans to work together to ensure the dream remains alive for all.
The magic moment that seems to have inspired DeYoung to undertake this recording is the duet with Julian Lennon on "To The Good Old Days".  The song was written as an ode to his musical roots and where be began, and the inclusion of Lennon brings it full circle.  Musically this is the biggest surprise on the album; the song doesn't have the same tenor as the rest of the album, and I suppose that's the point.  It's well written, but will probably be hit or miss depending on what fans are looking for.  The album wraps with A.D. 2020, an ode to Paradise Past.  Get out the tissues, it's an appropriate ending to a brilliant career.
Except it's not the end.
26 East, Volume II has seven songs in the can with two to be recorded.  If Volume I is any indication, Dennis DeYoung still has plenty of gas in the tank.
Rating: 4 Stars (Out of 5)
Posted by Wildy at 4:44 PM