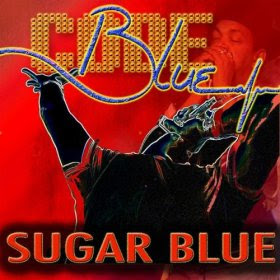 What do you say about one of the most innovative harmonica players in the world? Do you highlight the fact that he's played with the likes of Prince, The Rolling Stones, Ray Charles, Fats Domino, Stan Getz, Frank Zappa, Buddy Guy and Willie Dixon? Do you talk about his Grammy Award? Maybe you talk about his unique voice? How do you characterize an artist who is essentially a living legend? For a man like Sugar Blue, you let his music do the talking. Sugar Blue released his sixth album, Code Blue, in 2007. It's a gem.

Krystalline kicks off this set with funk and attitude. You will be jumping out of your seat once the groove gets into you, which won't take long. Chicago Blues laments the loss of many of the old Blues Greats. The highlights here are endless. Aside from his Grammy win for 1985's Blues Explosion, Sugar Blue is horribly unrecognized outside of Blues cognoscenti. Bluesman is a declaration of whom and what he is, and should serve as notice to music fans everywhere that the Blues Legends aren't all gone. Likewise Cold Blooded Man, which moves into the Funk-Rock realm where blues is a distant uncle. At the end of the day you have to acknowledge people like John Popper and Taylor Hicks for keeping the Blues Harmonica alive in pop music, but they wouldn't exist without someone like Sugar Blue.

Code Blue is everything you expect.

You can learn more about Sugar Blue at www.sugar-blue.com, where you can purchase a copy of Code Blue.
Posted by Wildy at 7:26 AM

How can you mention Taylor Hicks in the same story as these other performers? That's like talking about McDonald's in an article on fine cuisine.

Great review of Sugar Blue! And I have heard and read comments from Taylor Hicks regarding his appreciation and respect for great artists such as Sugar Blue. Taylor is awesome in concert with his bluesy harp and even adds it to his awesome performance in Grease on Broadway. You have to respect a guy so young who appreciates these legends and who, in turn, is making his own mark in music.

Taylor Hicks and John Popper will be featured in the indie movie "Pocket Full of Soul" - a documentary about harmonica players in the near future. Should be a fantastic movie.

Sugar Blue is the artist who taught me that a harmonica is an instument and not a childs plaything. He truly gives me chillbumps. I have to admit I agreed with the first poster about Taylor Hicks. I did not even know he played the harmonica, then I read the post where he will be featured in the documentary and it peaked my interest. Went to some of his fan sites and downloaded some of his live stuff.... and the boy can play a mean harp. He is not Sugar Blue, but I will give him some time to season before I count him out.

You said you didn't even know Taylor Hicks played harmonica. Then you have never heard him, so how can you comment on it. I love Sugar Blue and John Popper but Hicks also plays a great blues harmonica. I have heard all of them so I can make a fair judgment.

Oh darn, that will teach me to read to the end of the comment. Very, very sorry.

As an aside, the mention of Taylor Hicks and John Popper was to illustrate people who are trying to keep the art alive in popular music. I did take a particular position on how well or poorly they've done it. If you have heard any of Taylor Hicks' pre-Idol material it is fairly impressive.

In any case, I remember a number of years back people saying the same thing about Popper.

You read it here, and it peaked (sic) your interest, so you went and downloaded stuff? What do you think we are, stupid? You're just another Hicks fanatic who can't stand to read that somebody doesn't like him. Well, I don't like him either, and I would never put him in any category that includes good musicians of any kind. You can rant and fuss all you want, and not everybody is going to suddenly like Taylor Hicks. You should just let people have their opinions and leave it at that.

Great review! Thanks for the scoop on the Pocket Full of Soul documentary. I can't wait to see that. I love a bluesy harp! Check out the Blues Historian blog. He has featured Taylor Hicks' music as well. Who would've thought? He's really a great talent.

Enjoyed reading this article and agree that Taylor plays a mean harmonica. I'm looking forward to the harmonica documentary that Taylor will be appearing.

Don't ever say a bad word about Taylor! We will come and find you and lock you in a room and make you listen to all his grate music! Taylor Hicks is better than any of these other bozos who think they can play harp, he is the best! Soul Patrollllllll!

thanks for the heads up on this CD...love me some harp and this CD is sweet.

I never had much of an opinion one way or the other, or paid too much attention to the harmonica, until I began "following" Taylor Hicks. Now, I have a great appreciation both for the harp - and for those artists who make it sing. I'm really looking forward to the "Pocket Full Of Soul" movie.
Thanks for the Sugar Blues review.

Taylor is one of the premier Harmonica players out there today. Glad to see him keeping it alive and well and hope to hear a lot of it on his upcoming album.

Why are all you Taylor Hicks fans spamming this website? You should be ashamed of yourselves. You already have a horrible reputation. This is proof that it is well deserved. Taylor Hicks is not nearly as good as you are insisting that he is. Get a life.

They don't care about anyone but themselves, apparently.

I don't know that much about Taylor Hicks, but I do know that he wouldn't be getting a positive mention here if he didn't deserve it. It looks to me like the spammers are the people who are trying to run him down. That, in and of itself, is usually a sign of real talent. I'll have to look into his music. I'm looking forward to Pocket Full Of Blues. I wasn't aware that Taylor Hicks was going to be featured.