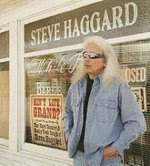 Steve Haggard has a long history of writing and releasing eclectic Americana tunes, infusing elements of blues, rockabilly and southern friend rock when he sees fit. His distinctive sound has brought him critical notice, but limited commercial movement. Ain't Life Grand? is a sort of career overview that includes songs from five of his prior releases, plus three songs from an upcoming release. I believe this may be a promotional retrospective and may not, itself be for sale (at least I could not find it for sale on the Wild Oats Records website). The focus is more on the country side of the tracks, and Steve Haggard has some great country cookin' going on.

It's actually hard to understand how Steve Haggard hasn't truly made it in the Country World. It may be that he still actually performs country music rather than the homogenized country-pop favored by CMT and country radio these days. I suspect that in the late 1970's and early 1980's he would have been considered a certain future Country Music Hall of Famer. Home Is Any Honky-Tonk captures perfectly the melancholy common in country music in the 1980's, while There's Blue (And Then There's Blue) lends itself to a good line dance on hay-strewn floor. Trust In Love is steeped in rockabilly tradition, with wicked guitar licks. Other highlights include Wine and Memories, Give Me One Good Reason and We're In Love.

If you're a fan of old-school country then Steve Haggard is your man. Ain't Life Grand? is a refreshing step away from the Botox era of country music we're in, and a step back to a time when country music mattered.

You can learn more about Steve Haggard at www.SteveHaggard.net (available after June 28, 2008. You can order Steve Haggard CDs through Wild Oats Records .
Posted by Wildy at 7:34 AM