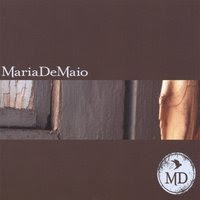 Based in the deep Boston music scene, Maria DeMaio & The Fellas have built quite a following in the past two years. She has been featured on XM Radios' XMU Unsigned and radio station WERS in Boston. What does a rocker do after navigating the Boston Scene to rave reviews for a couple of years? You take a leap of faith into the national scene and see if you can swim in the deep waters outside of Boston Harbor. With Maria DeMaio & The Fella's debut CD, Maria DeMaio, they have definitely put their best foot forward.

Maria DeMaio has a smoky, sultry voice that fills up your ears. Her band is absolutely tight and works the blues/funk influences nicely into some great rock tunes. Highlights include Her Side, Beyond The Pale, Swell, Eleanor and Fine Line. Honestly, my favorite song on the album is Further Behind, which shows a little more vulnerability and finesse than the straight forward rock tunes. This song is the keystone in that it shows that Maria DeMaio is more than just a blues-rock maven, but is an artist who can stretch and grow beyond the mold that she is obviously comfortable with (and so good at).