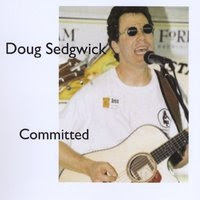 Doug Sedgwick is wonderfully schizophonic. Let me explain. Sometimes you will come across a guitarist (usually acoustic) in a bar or coffee house somewhere who’s been playing those scenes for years. They’ve developed a catalog of songs over the years by disparate artists, and perhaps they are such great performers that they’ve learned to channel the original artist (much like a stage actor). The end result is someone who might sound like Van Morrison on one song, John Sebastian another, Jim Morrison a third, etc.

Now imagine that of this group of road warrior musicians, you happen to find the one guy who also has tremendous song-writing ability and who over time has developed a catalog of his own music, but retains that ability to project different personalities/voices into his songs, like soliloquies in a one-man Broadway show. Now you’re talking about Doug Sedgwick. Based out of Reston, Virginia, this folk/rock singer-songwriter might be one of the best of the genre, and you’ve probably never heard of him.

Committed is a dazzling display of songwriting talent and chameleon-like performance acumen. Sedgwick has a homey, comfortable voice that slips over a song like a favorite sweater. His guitar-work is amazing. The depth and layers within the songs on Committed would take novice guitarist weeks to work through. The songs ultimately work because they (appear to be) primarily auto-biographical. Doug Sedgwick is very positive in his message and seems inclined to make the most of each moment, musically or otherwise.

Songs such as Committed, Cable TV, Darker Voice, Standup Blues II, and Peace In Our Hearts provide a roadmap for the journey Committed will take you on. There are no weak points here, just the usual highs and lows that are the trademark of a running conversation with an old friend. Doug Sedgwick’s Committed is a must-have CD.


His music lacks the orchestral balance that a piece like 1812 Overture requires, and for a strong orchestration of Mahler or Bartok, look elsewhere. The horn and Sax sections is could use a stronger lead. Clearly his lack of a Saxbutt, Kazoo, or Hurdy Gurdy limit his music's reach to the larger audiences of comedic medieval street musicians.


Yes, he is unrecognized. One of the greatest musicians of our time. Leonard Bernstein (b.1918-d. 1990) has said nothing about Doug Sedgwick's recent album. This is surprising given a 4.5 star rating to an unrecognized genius like Doug. We can only assume that this is the lack of the key orchestral insturments, and timing features on the C side of the album.

The CD was scratched on my turntable (need a new needle from Radio Shack).

I disagree with this rating. Generally I feel it is not necessary to listen to music to judge it, and this blog makes that mistake of actually forming an opinion from the music it self.