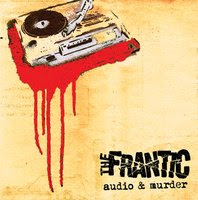 Thus starts Audio & Murder, one of the best pop-punk albums to float to the surface in last couple of years. Chicago’s The Frantic has managed to catch lightning in a bottle. Audio & Murder is the perfect blend of punk angst/aggression and some of the catchiest pop tunes going.

This is all very impressive for a quartet where the oldest member is 19. Age aside, The Frantic have been playing together for a long time and are one amazingly cohesive band. The musicianship is outstanding; the playing tight. This is music that will make you want to mosh the night away.

If you have your head in the MTV world, you’ve already heard the title track, Audio & Murder, but the album is chock full of rockers. The thing is The Frantic can write songs. Take a look at the times where they step back and tell you a story against a mellower backdrop: Movin’ Along and I Don’t Want To Be Alone. Movin’ Along is a spiteful breakup song that boomerangs on the singer. The emotional honesty is refreshing. I Don’t Want To Be Alone starts out as a confessional before devolving into the angry punk tune it wants to be all along.

Highlights? I can’t list highlights. This is a solid album front to back. Heifer is a particular favorite because of the sense of humor involved, and Rock & Roll Renegade is destined to be a classic. There are no songs here you’ll find yourself skipping on your iPod play list.

Audio & Murder is, quite frankly, one of the best releases of 2007. Period. End of statement. If you haven’t heard of The Frantic yet, then it’s time. They’re here to stay.

You can learn more about The Frantic at www.thefrantic.com, where you can purchase a copy of Audio & Murder.

Note: If you can find it, there’s a limited edition EP of Rock & Roll Renegade that has a cover of Build Me Up Buttercup on it. It’s an absolute must have. They only made 1,000 though, so find one quick, because I suspect it will be quite the collector’s item before too long.
Posted by Wildy at 6:54 AM

i love the frantic!!