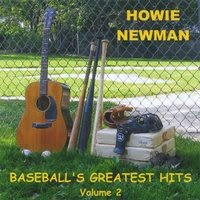 Howie Newman is a staple on the New England folk circuit.  His songs are warm, funny, family friendly and as at home around the kitchen table as in a concert hall.  Newman has graced us with baseball songs in the past, and he’s not done!  Here he comes with Baseball’s Greatest Hits, Volume II.  He’s rounding third and heading for home folks, this might just be a home run!

Mendoza Line may be one of the greatest Baseball songs ever written.  What else can you say about an American Rockabilly tune written about a shortstop from Mexico who once hit .198 for an entire season.  You also absolutely must check out It's The End Of The Curse As We Know It, a spoof of REM's It's The End Of The World As We Know It.  The song refers to the Boston Red Sox finally breaking "The Curse Of The Bambino" with their 2004 World Series Championship.  While as a Yankee fan I find the song to be detestable, I must admit it is quite a clever and entertaining send up of the original.  The EP also includes Weekend Warrior and Why Did You Go, Johnny Damon? Definitely check out Blasted In The Bleachers for a little comedic relief that closes out the album, or the enigmatic Doug Mientkiewicz, which wins the award for the best use of the name "Mientkiewicz" in a song.

Howie Newman is always entertaining, and for a Red Sox fan he's not al bad guy.  His albums tend to be good family entertainment.  This would be perfect for any Red Sox fan, long-suffering or otherwise.  Baseball fans in general will get a kick out of it, as will fans of country-tinged folk rock.  This is definitely a worthwhile 20 minutes spent!

You can learn more about Howie Newman at www.geocities.com/howie.newman.  You can purchase a copy of Baseball’s Greatest Hits, Volume II at www.cdbaby.com/newman4.
Posted by Wildy at 5:00 AM