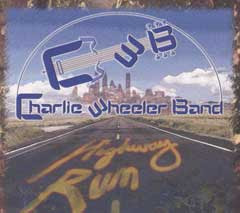 When you tell people you spend 15 months in the studio crafting your debut album, you better make sure it's good. The number alone builds expectations. Luckily for Charlie Wheeler, it's not bragging if you can back it up. Highway Run is a raucous trip back to a time when Rock was still a part of Rock-N-Roll.

Where to start? Charlie Wheeler is a superstar guitar player whether you've heard of him or not. But vocalist Greek Cheronis steals the show here. First of all, what a great Rock-N-Roll name: Greek Cheronis. Marketing aside, he has the perfect voice for a modern take on good old fashioned rock music. Highway Run is our introduction to the Charlie Wheeler Band, and it's everything you want in a rock album. New York City Night has a funk/soul groove to it that's irresistible, and catches the mood of the nocturnal city perfectly.

I Got To Ramble sounds like the sort of blues-inflected southern rock practiced by ZZ Top, and No One's Gonna Save You is a true rock ballad. Not the sort of easy listening cheese-metal ballads we've become accustomed to, but a song with definite rock structure and energy even while delivering it's low-key message. Other highlights include My Mama Cried, In A Daydream, When The Lord Comes To Get You, Protect You and Take Your Love From Me. Truth be told, there isn't a weak song here.

Charlie Wheeler and Greek Cheronis show the potential to be someday maybe be named alongside the likes of Page/Plant, Jagger/Richard, Van Halen/Roth, etc. This is one hot band, and Highway Run is must-have disc.

You can learn more about Charlie Wheeler Band at www.charliewheelerband.com. You can purchase a copy of Highway Run at Homegrown Music . The title track, Highway Run, is also featured on the July 2008 Relix Magazine Sampler, currently available on newsstands everywhere.
Posted by Wildy at 11:05 PM