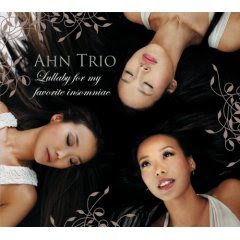 The Ahn Trio have long been known for breaking down boundaries in the classical music world. On Lullaby For My Favorite Insomniac, they cement their legacy one of the leading weavers of the disparate worlds of classical and popular music. Taking songs and the sounds from the wide-wide-world of popular music, the Ahn trio have constructed beautiful soaring string versions of some one the most beautiful songs you've probably never heard.

My personal favorite on Lullaby... is the very straightforward version of My Funny Valentine. This is a loving ode to composer Richard Rodgers and his daughter Mary, whom the Ahn trio met will at Juilliard. The CD also includes an inspiring version of David Bowie & Pat Metheny's This Is Not America.

Three tracks written or arranged by Kenji Bunch are here as well, including the moving Dies Irie. Also keep an ear open for two compositions from Grammy nominated composer Michael Nyman. Big My Secret and The Heart Asks Pleasure First (nominated from The Piano) are both very much worth a listen on their own, and are given special treatment by the Ahn trio here.

Lullaby works on many levels for many reasons. The Ahn trio started out with great songs that focus on pure melody, a requirement for any great lullaby. From there the arrangements have been written to allow for the music to meander into your mind like the tendrils of relaxation and sleep that come at the close of the day. The music will weave its way into your consciousness and mark the hours there within your memory. This is the gift the Ahn trio gives in their interpretations.

Even if classical music is not your thing, this album is too much of a masterpiece to pass by.

You can learn more about the Ahn Trio at www.ahntrio.com or www.myspace.com/ahntrio. You can purchase Lullaby For My Favorite Insomniac at the Sony-BMG Music Entertainment Store, at Amazon.com or at music stores nationwide. The album and individual tracks are also available for download through iTunes.
Posted by Wildy at 12:01 AM