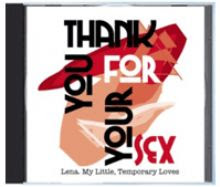 Lena Poptova is a Russian-born performer who is based in Chicago. She performs in a talk-sing style that is reminiscent of Canadian singer/songwriter Meryn Cadell (The Sweater Song). Her backup music is programmed drum and keyboard that recreates everything from 1980's hip-hop vibes to quasi-Information Society dance beats to Adult Contemporary ballad. My Little, Temporary Loves is a four track EP that serves as ample introduction to Ms. Poptova.

Loves includes 2 versions of Goodbye, one explicit. This song is more spoken than sung while was mildly entertaining on the first listen was not particularly memorable. Perfect Day is similar in effect, but sounds like something Madonna might have considered for a project in the early 1990's. The most interesting song here is Lena's cover of David Bowie's China Girl. Performed as a ballad, Lena's version is in stark contrast to the glam overtures of the original. It's interesting, but there just isn't a lot of energy here.

In general the recording suffers from a lack of energy or zest. Lena is an artist of some talent, but whatever joix-de-vivre she brings to her live performances is lost here.

You can learn more about Lena at lenamusic.wordpress.com. This particular single is only available as a giveaway to members of Lena’s mailing list. Check out her site for more info.
Posted by Wildy at 5:00 AM