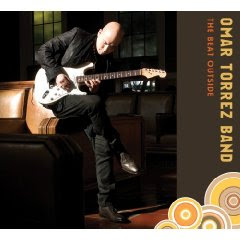 Omar Torrez is a virtual representation of what America should be.  He is a blend of Spanish, Basque, Norwegian, Native American and Russian roots.  Musically he has studied everything from Cuban styles to Andalusian Gyspy music to flamenco and classical guitar.  He is also a winner of the National Jimi Hendrix Guitar Competition at the Bumbershoot Festival.  To top it all off he was chosen by rock legend Tom Waits to accompany him on his "Glitter and Doom" tour in the US in 2008.  The Omar Torrez Band, in the meantime, delivers a funky-fresh release called The Beat Outside.  This album is destined to be a classic.

Sunshine may be the brightest of the highlights here, mixing blues, Latin and funk into one delicious treat.  This song screams for huge radio distribution.  We Are lives on a quasi-reggae groove and treats with the differences and concomitant similarities of people who look different from one another.  I'm Your Man shows off the chops that won Torrez the Hendrix competition.  You almost feel like he's channeling Hendrix at times.  Other highlights include Rich Man, the ballad Say Goodbye and the acid rocker Free Your Mind.

Omar Torrez is the real deal, from top to bottom.  Like Omar Torrez, The Beat Outside dips so deeply into various ethnic and stylistic wells that it is ultimately nothing other than American, and a sterling example at that!

You can learn more about Omar Torrez Band at www.omartorrez.com, where you can purchase a copy of The Beat Outside.  You can also purchase the CD through Amazon.com.
Posted by Wildy at 11:34 PM