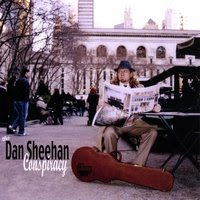 Dan Sheehan is known to many in the Boston and New York music scenes as one of the creative forces behind the band Banter, which obtained cult status in those markets.  Now Dan Sheehan has been set free from the constrictions of being part of a band and has unleashed his full creative force into The Dan Sheehan Conspiracy.  Sheehan rocks with the vigor and suppressed anger of the best punk rockers, but is influenced stylistically by modern and prog rock.  The Dan Sheehan Conspiracy is an ample introduction to this talented musician.

Sheehan brings the intensity of Jim Morrison to the microphone, and even sounds a bit like him at times.  The frenetic energy in Sheehan's guitar work reminds me of a Canadian Alt-Rock band from the 1990's called Dig Circus.  There's even a rap/rocker in here, Collateral Damage, imploring listeners to pay attention to the after-effects of war on soldiers and their families.  Sheehan runs the gamut from classic rock anthem (See Kay, The Valley) to folk song (Rock Song) to ballad (Before You Wake).  The true highlights come in the prog flavored Patterns In The Rain.

The Dan Sheehan Conspiracy has already seen airplay on nearly 200 radio stations across the US, and I suspect that number will only increase in time.  Dan Sheehan's subject matter will appeal to broad swath of the general public, and the music is first class.  His voice is unique and memorable, with just a hint of that Morrison mystique.  Add in the solid drumming of Morrissey's Spencer Cobrin, and there is something here to appeal to music fans of many tastes.  The Dan Sheehan Conspiracy CD is something you'll want in your collection.