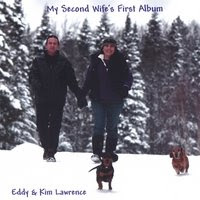 Sometimes you come across a musician that should have made it twenty years ago, and who never quite did, but never gave up. Meet Eddy Lawrence – a gifted flat-pick guitar player who is a veteran of the early 1980’s East Village music scene in New York City. 20 some-off years later Eddy lives in a small town in Upstate New York and continues to write some of the most genuine folk music out there.

My Second Wife’s First Album features Eddy Lawrence’s signature guitar style, easy to listen to voice, and thoughtful (and sometimes humorous) songs. Turnpike is perhaps the class of the album, but it’s really hard to find any weaknesses here. Other highlights include Camp Cumberland, Your Mama Loves Me, Step 8, and Weekend At The Muggles.

Whether it’s your first foray into folk music, or the continuation of a long association, Eddy & Kim Lawrence are worth a listen. You might just find yourself "slapped by the strong arm of love."

You can learn more about Eddy & Kim Lawrence at www.snowplowrecords.com. You can purchase a copy of My Second Wife’s First Album at www.cdbaby.com/eddykim.
Posted by Wildy at 6:42 AM