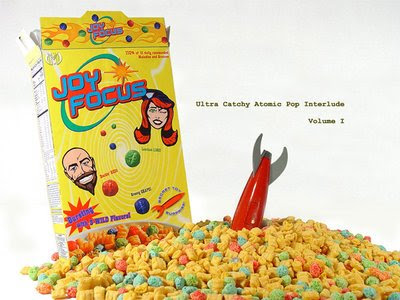 JoyFocus is a power rock due from Wheaton, IL, consisting of Holly Joy and Rikk Currence. Dancing around the edge of contemporary Christian rock, JoyFocus displays powerfully positive messages in their songs.

Ultra Catchy Atomic Pop Interlude - Volume 1 consists of three songs. Rikk Currence shares vocals with Holly Joy on He & Mary. Their voices are in perfect counterpoint to each other, she with a child-like quality reminiscent of Cyndi Lauper, circa-1985; he with a mellow baritone. On Mr. Hughes Comes Home and Prayer the lead is all Holly Joy. Her enigmatic sound wraps itself in the music like a trusted friend, particularly when Currence joins in on harmony in Prayer.

This is just a small sample, but it's obvious that JoyFocus has a certain spark or chemistry that turns the connection of notes and words into something more than just the song. They have a full length release due in the Fall of 2008, and I will be excited to see what that brings.

You can learn more about JoyFocus at www.joyfocus.com. Ultra Catchy Atomic Pop Interlude – Volume I is available as a download through iTunes.
Posted by Wildy at 11:24 PM