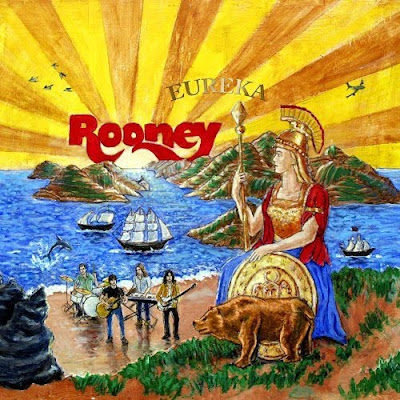 After a decade working under a major label contract, rockers Rooney step out on June 8, 2010 with their first independent album, Eureka. As if slipping from chains to freedom, Eureka is a buoyant and expressive album that explores real world emotions but does so amidst some of the most ebullient pop/rock songwriting of Rooney’s career.

Eureka opens with "Holdin' On", a song of hopeful regret that bemoans the past but looks forward with the expectation that things will get better. Robert Schwartzman perhaps draws on his own experiences dealing with a major label here, delivering his soliloquy in a great, upbeat pop arrangement. "I Can't Get Enough" is a radio-ready pop tune with a great, memorable chorus. This is a song that could take over the radio airwaves for the summer season. It's a bit light on meaning but has that all important unforgettable pop hook and blends rock and dance music nearly perfectly. "Only Friend" is a great bit of 1970's rock n roll with a tune that will get stuck in your brain; it's a pleasant change of pace.

Rooney gets existential on "Into The Blue" before launching into the pure radio pop/rock of "All Or Nothing". All of this is just a buildup for "The Hunch", which may be the best song Rooney has written/performed to date. There are hints of The Beatles and Del Amitri in this song's lineage, but the sound is so fresh and peppy it seems like a sure-fire hit. "I Don't Wanna Lose You" continues in much the same vein; an incredibly catchy pop/rock tune with roots in the 1960's but fresh as can be. Rooney stays firmly rooted in catchy pop, this time with a melancholy twist on "Go On", another song that wants to jump off the album into your ears and straight to your brain, where it could reside for days on end.

"You're What I'm Looking For" is a classic, upbeat love song blending rock and Americana around a catchy melody. It's a bit more laid back than much of the album, but works very well for the band. "Not In My House" is an intriguing song full of anger. It could be a breakup song, or it could be an ethnocentric soliloquy. Either way it's a brilliant tune. Schwartzman sounds a bit like late 1980's Billy Joel here. Eureka closes with "Don't Look At Me"; an ambitious pop tune that explores the effect that being out of work can have on someone. It's an apropos song for troubled times, putting into words and music the frustration of the nearly 18% of the American population (and larger proportions in other countries) who are unemployed or underemployed.

Rooney mixes good time rock n roll with deft political and social messages throughout Eureka. Of course, some of the songs are just for fun too. Rooney plays in the same melodic playground as The Beatles, with distinctive pop sensibilities woven into arrangements that run the gamut from 1960's to 1980's pop/rock with the occasional touch of Americana thrown in. Eureka is perhaps Rooney's most accessible album to date. In another era this would be a monster album that just kept on giving hit singles, perhaps on a par with Hootie & The Blowfish's Cracked Rear View. Don't be surprised if several songs from Eureka break into the wide open and dominate the radio waves this summer. This is what rock n roll is all about.

Rating: 4.5 Stars (Out of 5)
Learn more about Rooney at http://www.rooney-band.com/ or www.myspace.com/rooney. Eureka drops on June 8, 2010. You can pre-order the CD or Vinyl from Amazon. Digital pre-orders are available from iTunes in both Standard and Deluxe versions.
Posted by Wildy at 5:20 AM