The Last Barbarians - Take It Back [EP] 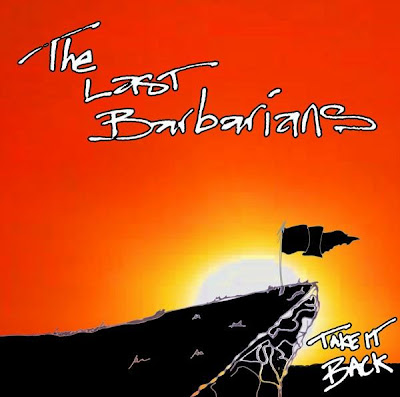 Philadelphia's The Last Barbarians are preparing to take over your mind. Their Take It Back EP sets the stage for the band's next plan for conquest, release a series of free singles throughout 2010 to allow them to perfect songs at their own pace while touring and partying. Mixing metal and groove-filled rock with a nonchalant air, The Last Barbarians have built a buzz between Philadelphia and New York City that's found them playing venues such as The Khyber and The Annex.

Take It Back opens with the speed punk/funk number "Slave Dog", a rocker so frenetically dance-oriented you might literally dance your head off. Bass player gets a workout that would make Jillian Michaels shake her head in wonder as The Last Barbarians rocket through this song. The other song on Take It Back is "The Curse", built around an anachronistic guitar riff that sounds like a cross between The Butthole Surfers and Iron Maiden. The sound here isn't pretty, but pretty isn't the intent. The Last Barbarians intend to melt your face while you slam to the funk. They succeed on all accounts.
Rating: 3 Stars (Out of 5)
Learn more about The Last Barbarians at http://www.thelastbarbarians.com/ or www.myspace.com/thelastbarbarians. Take It Back is a free two-song single available through The Last Barbarians' web store. Be sure to check out their other releases while you're there.
Posted by Wildy at 5:00 AM