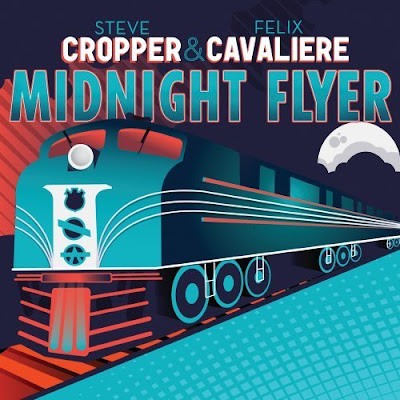 Felix Cavaliere’s personal history in rock n roll reads like kismet. Originally a member of Joey Dee & The Starliters, Cavaliere moved on to associations with The Young Rascals, The Stereos and The Escorts before moving into a successful though intermittent solo career. Along the way Cavaliere has produced albums for folks such as Jimmie Spheeris and Laura Nyro. Steve Cropper is the house guitarist for Stax Records and also served as a member of The Blues Brothers Band. Recently the two got together to make a bit of magic in the form of Midnight Flyer, due out tomorrow.

Midnight Flyer opens with "You Give Me All I Need", a vibrant love song that mixes 1970's AM Rock and Soul. It's a solid, mildly danceable tune the Bee Gees would be proud of, but Cavaliere's soulful vocal line brings it to a higher level and Cropper's artful guitar fills are icing on the cake. Twenty years ago this is a top-10 hit, and even today don't be surprised if Cropper & Cavaliere find significant chart success with "You Give Me All I Need". Funk, soul and dance mix nicely on "Midnight Flyer", a highly danceable tune you won't be able to get out of your head. Cropper & Cavaliere manage to capture a sound that's both timeless and fresh. "When You're With Me" is a love song with a Motown-lite Feel; a solid tune with commercial legs.

One of the best performances on the album is "I Can't Stand It", a slice of Chicago soul written by Smokey McAllister featuring Aria Cavaliere in a vocal duet with her father. The energy here is over the top. Cavaliere moves into Marvin Gaye territory with "Chance With Me", a heavy but slinky soul tune that will stick with you. Cropper & Cavaliere surf the divide between soul, funk and disco on "Move The House", the most unashamedly dance-oriented tune on the album. It's a classic moment that makes the most of retro sound and the vitality of today. "Sexy Lady" is a wonderfully retro song of desire; don't be surprised if this song is licensed six ways to Sunday for television and movies over the next few years.

"Early Morning Riser" has a solid groove, and "All Night Long" has a vague island feel to it, but it's the Memphis Soul of Ann Peebles' "I Can't Stand The Rain" that really revs up the back end of the album. The penultimate song of Midnight Flyer is a show-stopper, and likely will be on stage as well. Cavaliere stretches his vocal chords a bit here in a fine performance, also providing zest on keys. Cropper and Cavaliere say goodnight with "Do It Like This", a lively instrumental that finds Cropper at his best, showing off wicked blues-based riffs that Cavaliere teases with subtle but powerful work on the keys.

Steve Cropper & Felix Cavaliere have a serious party on their hands with Midnight Flyer, arguably the best classic soul & funk album of the year to date. It's hard to imagine this album not residing on a host of year-end lists. While perhaps not the freshest work of Cavaliere's career, he's certainly captured the vigor of youth on what may be destined to be one of his bestselling albums.

Rating: 4 Stars (Out of 5)
Learn more about Felix Cavaliere at http://www.felixcavaliere.com/. Learn more about Steve Cropper at http://www.playitsteve.com/. Midnight Flyer drops June 15, 2010. CDs are available from Amazon. Expect wide availability in multiple formats.
Posted by Wildy at 5:10 AM

I'm looking forward to hearing this one... Steve Cropper is headling the Sandestin Music Festival here in August, and as much as I enjoyed Nudge It Up a Notch, I never suspected a follow-up. A nice surprise.