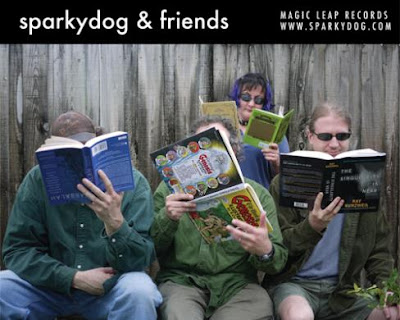 Sparkydog & Friends are a songwriting and performance collaborative out of the UK that has gone from Indie rock to wonky pop through the evolution of studio work. Debuting two singles at SXSW 2010, Sparkydog & Friends has generated more than a bit of buzz on both sides of the Atlantic. Sparkydog & Friends recently sent along an EP with their first two singles, “People Of The World” and “Red Light. "People Of The World" is a catchy tune with a Brit-rock feel that suffers from a paucity of enunciation. The chorus is catchy and repetitive, but the lack of ending consonants can make for tricky listening. "Red Light" is a decent pop ballad and much more understandable. The melody will stick in your head, and the song is a potential quiet hit.

Learn more about Sparkydog & Friends at http://www.sparkydog.com/ or www.myspace.com/sparkydogband. Both "People Of The World" and "Red Light" are available for download on iTunes.
Posted by Wildy at 5:00 AM