Jackyl - When Moonshine And Dynamite Collide 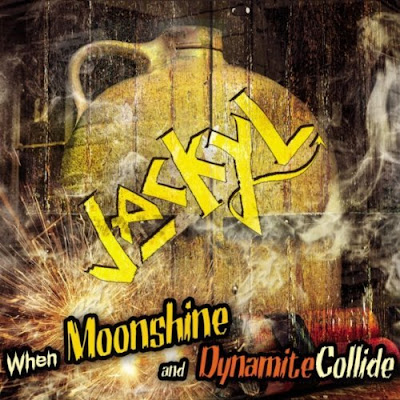 Jackyl might never recapture the buzz and glory of the early-to-mid 1990’s, but apparently nobody told them this. On their latest album, When Moonshine And Dynamite Collide, Jackyl digs into a 1980’s inspired sound and yet sounds as fresh as can be. With influences ranging from AC/DC to southern rock n roll, Jackyl goes back to their roots and manages to write some of their best material to date.

When Moonshine And Dynamite Collide opens with "Loads Of Fun", a catchy piece of 1980's hard rock with serious pop sensibility. It's a great foot forward for a band looking to reclaim its glory days. "I Can't Stop" is an old-fashioned glam rock party song; well-done but done-before affair. Jackyl maintains their catchy glamour on "She's Not A Drug" and "My Moonshine Kicks Your Cocaines @ss", the latter of which is an off-beat celebration of the south and its many charms. The band runs out of momentum in the middle, but claws back with "When Moonshine And Dynamite Collide", sounding more than a bit like a cross between Lynyrd Skynyrd and The Black Crowes.

"Just Like A Negro" pays tribute to African-American contributions to American music and culture, particularly rhythm & blues both in and of itself and as one of the prime roots of rock n roll. Jackyl gets into their trademark sound with "Deeper In Darkness" and "Freight Train", going over the top in classic style. The cover of Janis Joplin's "Mercedes Benz" is amusing, done in the original a Capella style. This leads into the closing track, where Jackyl hits the aptly named "Full Throttle" in a song about motorcycling.

Jackyl still has their feet firmly planted in the 1970's and 1980's, but refuses to turn into a dinosaur on When Moonshine And Dynamite Collide. Jackyl's latest is a solid effort likely to appeal to old fans and add a few new ones along the way.

Rating: 3 Stars (Out of 5)
Learn more about Jackyl at http://www.jackyl.com/ or www.myspace.com/jackyl. When Moonshine And Dynamite Collide is available as either a CD or Download from Amazon. Digital copies are also available via iTunes.
Posted by Wildy at 6:01 AM