Molly Knight - The Art Of The Dance 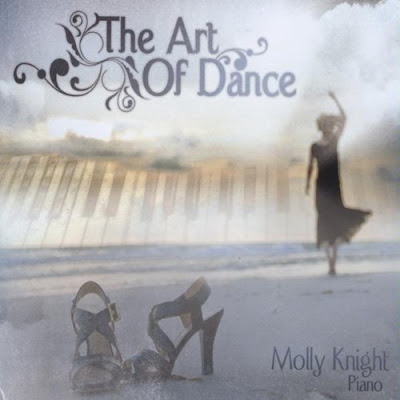 Molly Knight - The Art Of The Dance
2009, KnightMusic

Molly Knight is a world-renowned pianist with piano performance degrees from the Cincinnati Conservatory Of Music and the University Of Washington. She has studied with such renowned teachers as Gaby Casadesus, Bela Siki, Elizabeth Pridonoff and Jacques Rouvier. Along the way, Knight won the Diplome de Virtuosite at the Schola Cantorum in Paris, where she also taught piano. Knight has been cited for her nuance by no less august a publication than Paris’ Le Monde, and has thrilled audiences on two continents both as an accompanist and as a solo concert pianist. In 2009, Knight released her solo album, The Art Of The Dance, crossing three centuries to display her musical depth and ingenuity.

Knight opens The Art Of The Dance with Johan Sebastian Bach's French Suite No. 5 In G Major (BWV 816; 1722-1723), in which her fingers dance with all the joy at the universe that seems to inflect Bach's finest works. Knight has a light touch at the keyboard and uses powerfully dynamic phrasing to highlight every nook and cranny of the opening movement, "Allemande". Courante is much more mechanical in sound, although this appears to be more of an artistic choice than a deficit. In the meantime the finger work here is amazing, particularly in Knight's left hand. By the time Knight crests the third movement, "Sarabande", her play has become much more legato and interpretive, while allowing her more emotive tendencies to shine through.

"Gavotte" (Movement 4) is more transitional in nature, sounding like the sort of music you might hear in a movie scene featuring a baroque parlor party. Knight does sound a bit rushed at times both here and in "Bouree" (Movement 5), but it's an inspired rush that seems essential to the mood of the piece. It helps to remember that Bach was writing the rock n roll of his day, and therefore the rules, in many ways, were all his own. "Louree" (Movement 6) finds Knight stepping back just a bit and interpreting a bit more, adding a refined touch to a sometimes halting and pensive composition. Knight returns to Bach's headlong style of play on "Gigue" (Movement 7), performing the sort of finger acrobatics that cause lesser pianists to retire in shame.

Knight next tackles Edvard Grieg's "Holberg Suite, Op. 40" (1884), performed as originally written for solo piano. The "Holberg Suite" was written by Grieg for the bicentennial of playwright Ludvig Holberg's birth, and makes use of 18th century dance forms. Knight imbues the first movement, "Prelude", with power and majesty that are perhaps surprising. "Sarabande" is much the opposite, a quiet, thoughtful piece with a hymn-like mien. The thing that stands out most here and elsewhere on the album is Molly Knight's phrasing, which it is difficult to find sufficient superlatives to describe. "Gavotte" (Movement 3) has a jaunty air, playing like the first blush of spring, while "Air" (Movement 4) has a funereal feel that is palpable. Knight ties it all together with "Rigaudon" (Movement 5), an inspired dance that takes on a life of its own.

Knight's interpretation of 3 movements of Enrique Granados' "Spanish Dances" is technically superb and full of life, but pales in comparison to her reading of Maurice Ravel's "Valses Nobles Et Sentimentales", where Knight emotes with both poetic and emotive license both the dark and light in one of Ravel's finest works. Written in 1911, "Valses Nobles Et Sentimentales" combines both modernist and impressionist styles in a series of waltzes that may have been Ravel's greatest creative passions. It's apparent that Knight gets this, as her performance of the eight waltzes Ravel wrote under this title is inspired and magical. When this piece first premiered in 1911 it was met with a chorus of catcalls and boos because of the then ahead of its time use of dissonance as a harmonic construct. Knight makes the most of these moments, playing out each moment of tension for all its worth, thus giving the moments of resolution much greater power when they come.

Pianist Molly Knight takes listeners on quite a tour on The Art Of The Dance, traveling from the Baroque Period up through the nascent days of the twentieth century. The versatility of style and demeanor that Knight displays on The Art Of The Dance is manifest; with Knight seemingly bringing her Boesendorfer to life. Throughout, it's Knight's phrasing that wins the day, with moments both pensive and passionate ringing so clearly it's as if Knight taught her piano to talk. The Art Of The Dance is an album any serious classical music aficionado will relish, but it's accessible to the novice as well. Prepare to be enthralled by the depth of Knight.

Rating: 5 Stars (Out of 5)
Learn more about Molly Knight at http://www.knightmusik.com/. The Art Of The Dance is available in multiple formats from CDBaby and Amazon.
Posted by Wildy at 6:15 AM

I think everybody should glance at this.