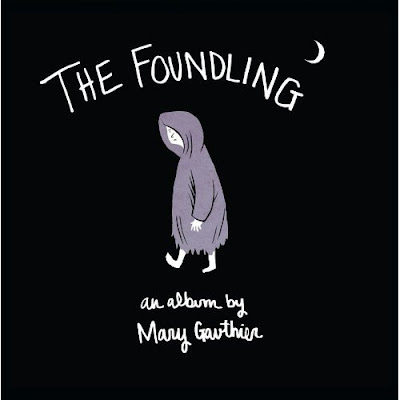 Mary Gauthier places a bit of herself in every song, but on her sixth album, The Foundling, Gauthier takes it to a new level. The Foundling is an autobiographical concept album, if such is possible. Dealing with her abandonment as an infant and the journey of understanding that took some forty years thereafter, Gauthier’s The Foundling is intensely personal, and plays like the soundtrack to a musical. With production from the Cowboy Junkies’ Michael Timmins, and backing vocals from the exquisitely voiced Margo Timmins, Gauthier weaves wondrous songs of truth, tragedy and hope on The Foundling.

Gauthier opens with the title track; "The Foundling" has a dark, southwestern country feel done up in minor keys. Gorgeously orchestrated, "The Foundling" sounds like Broadway done sorrowful cowboy style. Gauthier's voice is full of texture and pain; she breathes each line as if she's living the tale rather than telling it. "Mama Here, Mama Gone" is the stark picture in song of a newborn without a Mama to reach out to. It's a sorrowful heartbreaker, ethereal and beautiful in the pure tragedy it conveys. "Goodbye" could be The Foundling's (the character) theme; the story of a soul too pained to stay in one place too long or make any personal connections. Gauthier's plain-spoken vocal style is a treat; bring an earthy sensibility to a dark character story.

Shades of New Orleans slip in on "Slideshow", a song about the sort of nighttime entertainments that draw the lost and disaffected. It's Gauthier at her best, as the redheaded step-child of Randy Newman and Bonnie Raitt. "Blood Is Blood" documents the search for the mother who left her; walking the streets of New Orleans searching for a face that's somehow familiar though unknown. The song is full of emotional turmoil, played out effectively between the violin and guitar. Love, anger, sorrow and ribbons of resigned hate pulse through this powerful tune of longing. "March 11, 1962" is a coming home, of sorts. Gauthier finds the mother who bore her, and reaches out via telephone. Unsure of why she's calling, but looking for some sense of peace. There is an air of hope that rises out of the darkness of years, but falls back into resignation as she closes the call with an ending rather than a beginning.

In "Sweet Words" Gauthier comes face to face with her own inability to trust in the kindness of others. It is the quiet anthem of someone who has been deeply hurt and can never fully trust again. The other side of the emotional coin is presented on "The Orphan King", the lost and perpetually lonely dream of love and hope for it even as it eludes their broken souls. It's a tremendous soliloquy of hope against hope. "Another Day Borrowed" is perhaps something of a happy ending. Our anti-hero continues to travel from town to town, failing to put down roots or build connections too deep; but she's no longer running. Now Gauthier is thankful for each day and opportunity, taking from the world what it will give with an air of wonder that even such pittance might be hers.

Mary Gauthier's is a highly affecting and musical affair; an Off-Broadway musical in the making should she wish it. All the elements are here; an intriguing lead character, an archetypal motivation, the sort of human flaws we can all identify with but magnified to theatrical levels, and a resolution that isn't happily ever after, but happy nonetheless. Musically, The Foundling is an amazing experience. Gauthier's songs flow like water, with the gritty determination of someone who has spent a life getting by on inspiration and grit. If you're not moved by The Foundling you aren't listening.

Rating: 4 Stars (Out of 5)
Learn more about Mary Gauthier at http://www.marygauthier.com/ or www.myspace.com/marygauthier. The Foundling is available as either a CD or Download from Amazon. Digital copies are also available via iTunes.
Posted by Wildy at 5:10 AM