Catherine Russell - Inside This Heart Of Mine 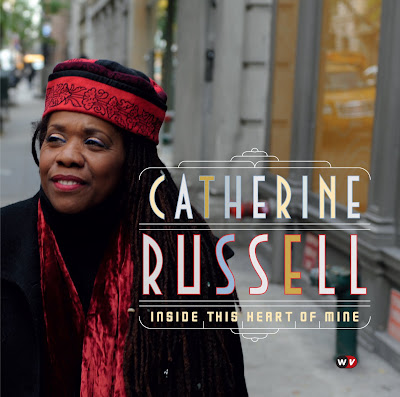 Catherine Russell - Inside This Heart Of Mine
2010, World Village/Harmonia Mundi S.A.

Catherine Russell has a voice you’ve heard many times even if you don’t know who she is. The New York City born daughter of Luis Russell (Louis Armstrong’s musical director) and Carline Ray (bassist and vocalist), Russell has performed or recorded with the likes of Paul Simon, David Bowie, Steely Dan, Cyndi Lauper, Jackson Browne and Rosanne Cash. In April of this year, Russell released her third studio album, Inside This Heart Of Mine, cementing her reputation as one of the most original voices in Jazz.

Russell opens with the title track. "Inside This Heart Of Mine" juxtaposes a regretful vocal line with a jaunty bass line, and Russell makes the most of this happy accident with a smooth voice you could listen to all day. The backing band is nothing to sneeze at either. On "All The Cats Join In" Russell gives us a healthy dose of gentle swing in a song about both the benefits and potential bedevilment of a good party. Russell does a splendid job with "We The People", but her band nearly steals the show with absolutely inspired play, layering solos one over the other in a way that should sound crowded but manages not to. Pianist Mark Shane is particularly impressive whether taking a solo lead or filling in and around Russell's angelic voice.

Russell shows her bluesy side on "Troubled Waters", lamenting the power of gossip to ruin a life, but returns to lighter fare with the classic-sounding love song "As Long As I Live". Russell's temperate alto inhabits this song and brings forth a sound so lovely and warm you'll be moved. The Sarah Vaughan comparisons are going to be made, particularly after this song. Hints of Reinhardt & Venuti can be heard in "Just Because You Can", with Russell taking vocal but sharing the stage equally with guitarist Matt Munisteri and violinist Sara Caswell. Russell is at her sharpest here, making the instruments step-for-step.

Russell excels at the upbeat "Close Your Eyes", and proceeds to start a musical party with "Quiet Whiskey", displaying the wit and enthusiasm the song calls for many times over. Once again, pianist Shane tries to steal the show with absolutely inspired play. You'll hear the sounds and strains of New Orleans on "Slow As Molasses" before Russell launches into the closing number, "Struttin' With Some Barbecue", a magical Dixieland number that will get you dancing.

Catherine Russell could suddenly appear in any era of American Jazz music and be a star. Her voice could fit comfortably amidst those of Holliday, Vaughan and Fitzgerald. Just as good is her backing band, which lights up the soundboard behind her. Inside This Heart Of Mine is destined for critics' year end lists.

Rating: 4 Stars (Out of 5)
Learn more about Catherine Russell at http://www.catherinerussell.net/ or www.myspace.com/catrussell. Inside This Heart Of Mine is available from Amazon as either a CD or Download. Digital copies are also available via iTunes.
Posted by Wildy at 6:23 AM

I found a great deal of helpful information in this post!