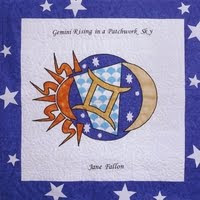 Jane Fallon was born on the West Coast but calls New England home. Her mix of gentle humor, intelligence and deep musicality imbues her songs with an artfulness that is unusual. Fallon plays throughout the Northeast, charming audiences everywhere she goes. Fallon recently released her third studio album, Gemini Rising In A Patchwork Sky, her best work to date.

Gemini Rising In A Patchwork Sky opens with "Give Me Grace", the Appalachian prayer of an octogenarian who is thankful for the blessing of a life well-lived but also seeks refuge from the burdens of his years. Fallon's textured alto is poignant, caressing the story with a rough-hewn beauty that is illuminated by a sweet harmony vocal. "It's How Deep" is morality tale stressing the quality of memory over quantity. There's a tragic warmth to this tale of love conquering even the cruelest of human frailties. Fallon lightens the tone with "Money's Gone Blues", a humorous and well-written story-song with a vaudeville feel.

"One Horse Town", written by Jim Henry, is about the tragedy and triumph of raising children in a small town, where success means escape for the children as their parents sew lives out of simple pleasures at home. It's a well-written song full of nuance and levels of humanity that are hard to capture in song. Fallon's "Blue Dress" is the heart-warming remembrance of a widower who revels in a photo his wife had taken before they were married. The story is a testament to the power of love to overcome even death, and is written in delicate human terms. In "The Boy He Used To Be", Fallon tells the story of a World War II soldier who went to war a peaceful boy and came back home a broken man. In a generation where such things were not discussed, many suffered and died slowly from wounds that even their loved ones might never have seen. Fallon illuminates one such tail as a reminder of the costs of war that we never see.

"Country Winter's Night" is a personal look at a relationship that didn't pan out. Fallon takes the best from the experience; grateful for the ride and sorry for the fall. The reverie expressed here is from a place of peace where hope resides but reality reigns. "Gemini Rising" is a piano ballad about the belief that the stars control our destinies, exploring the apparent fallacy of such an idea yet noting the similarities that many seem to share. Fallon closes with "Heaven Can't Help You", a decent tune that is alright on its own but is perhaps something of a let-down as a closer to an otherwise exceptional album.

Jane Fallon isn't about to blow you away with her rustic voice and homespun stories of real people, places and emotions, but she is an adept story-teller and crafter of songs. Gemini Rising In A Patchwork Sky requires careful, attentive listening, as Fallon's greatest gift as a songwriter is in the details. Each song here plays as if it has been perfected through mercurial craftsmanship and care. This effect is accomplished without making the songs sound overwrought, which is a surprise, but Fallon's eye for detail is unquestionable. Spend some time with Fallon and Gemini Rising In A Patchwork Sky. You won't be disappointed.

Rating: 4 Stars (Out of 5)
Learn more about Jane Fallon at http://www.janefallon.com/ or www.myspace.com/janefallonfolk. Gemini Rising In A Patchwork Sky is available as a CD or Download from CDBaby. Downloads are also available via iTunes.
Posted by Wildy at 6:14 AM